Julie Goldstein, second from the left in the second row, is seen amongst the 2011 V-Day LA cast
Kellena Shumate
Ideas
By Julie Rei Goldstein
Julie Rei Goldstein is an actress, voice over artist and an ardent trans feminist.

My introduction to The Vagina Monologues and V-Day was over a decade ago. My girlfriend at the time worked at the Women’s Resource Center for San Jose State University and was in charge of organizing our school’s V-Day event. Being a theater major, she thought my participation would be a perfect fit. I did not know what to expect or how I would be received given that I am a transgender woman. What I found was the most diverse and accepting group of women I had ever had a chance to work with. I enjoyed my time so much that even to this day I jump at the opportunity to participate in local productions. Most recently I had the pleasure of participating in the 2011 Los Angeles V-Day event at the Barnsdall Gallery Theater.

Even though, at its core, V-Day encourages women to speak openly about vaginas, I have never found the conversation it encourages to be dependent on genitalia. What we have always sought to facilitate is highlighting the oppression women across the board have experienced through violence — trans misogyny included. The negative connotations our society has placed on the word vagina are a clear symbol of that oppression. As much as we would like to think that we have overcome those views, we are consistently reminded that we have not. For example, just two years ago, Rep. Lisa Brown was banned from the floor of the Michigan House of Representatives simply for saying vagina.

V-Day events are not just about speaking out, they are also about raising money for organizations working to prevent violence against women and to support those who have faced it. Many recipients of the funds raised have been transgender organizations. This should not come as a surprise to anyone given the alarming rates of violence trans women face, which disproportionately target trans women of color. The year I was fortunate enough to co-direct our school’s production, our team made the decision to donate what we had raised to a local housing organization for battered women. Furthermore we specified the organization we chose had to be trans inclusive.

The responsibility of trans inclusivity is not on V-Day as an organization or the material Eve Ensler has written. They have already provided all the tools you need to make it inclusive. It is on each individual production to use those tools to ensure all voices and experiences are heard. Even the monologue that highlights transgender women, They Beat the Girl Out of My Boy, includes varied perspectives from within the trans community across both gender expression and sexual orientation.

Just as I have been able to learn extensively from the diverse women I have worked with, I have also had the chance to teach others about my own persona. The experience has inspired them to highlight stories of trans women in their own work. V-Day has provided me with an avenue to provide trans visibility not just to them, but also to the audiences for which we have performed. When only 8% of people say they know someone who is transgender, lack of visibility can often be the most common barrier to acceptance.

Celebrating women through The Vagina Monologues doesn’t mean the experience is exclusive to having a vagina. I point to my own personal favorite monologue as one that does not even include the word vagina. Yet it still retains what I have always felt Eve Ensler sought to create: a vehicle for finding strength and beauty in what society considers to be your weakness.

Julie Rei Goldstein is an actress, voice over artist and an ardent trans feminist. 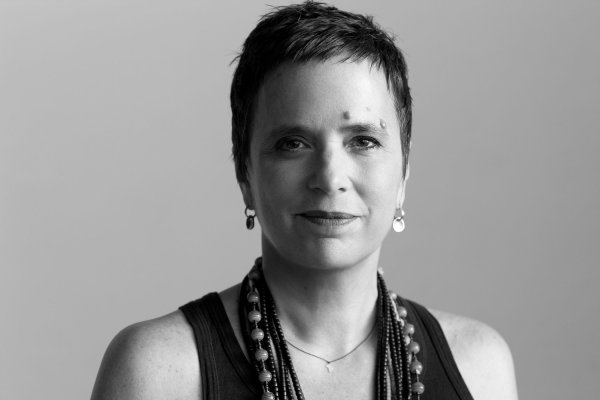 Eve Ensler: I Never Defined a Woman as a Person With a Vagina
Next Up: Editor's Pick