How To Shake Up Gender Norms

What determines your destiny? That’s a big question with what should be a complicated answer. But for many, the answer can be reduced to one word: anatomy. Freud’s assertion in 1924 that biology is the key determinant of gender identity, for instance, was for years a hegemonic idea in both law and culture.

Ever since Freud made this notion famous, critics have been objecting to body parts as central predictors of one’s professional and personal path. Many now believe that identity isn’t solely the domain of nature or nurture, but some combination of the two. Still, Freud’s theory isn’t yet dead; enduring gender norms show us that the bodies we’re born into still govern lives of women and men around the world.

But according to some recent research, its influence may be fading. In one new study, a majority of millennials surveyed argued that gender shouldn’t define us the way it has historically, and individuals shouldn’t feel pressure to conform to traditional gender roles or behaviors. Enforcing norms can even have health risks, according to another study. Some women’s colleges are now reportedly rethinking their admissions policies to account for gender non-conforming students. And even President Obama is getting in on the norm-questioning trend: While sorting holiday gifts for kids at a Toys for Tots in December, the president decided to place sporting equipment in the box for girls. “I’m just trying to break down these gender stereotypes,” he said in a viral video.

But will continuing to challenge gender norms and document their harmful impacts lead to their extinction? To answer that question, we need to first consider another: What’s so bad about traditional gender norms and the way we currently categorize men and women?

For one thing, the way we categorize gender is far too facile, explained Alice Dreger, a leading historian of science and medicine, in a 2010 TED Talk. “We now know that sex is complicated enough that we have to admit nature doesn’t draw the line for us between male and female… we actually draw that line on nature,” she told the audience. “What we have is a sort of situation where the farther our science goes, the more we have to admit to ourselves that these categories that we thought of as stable anatomical categories that mapped very simply to stable identity categories are a lot more fuzzy than we thought.”

Fuzzy – and maybe not entirely real in the first place.

“If there’s a leading edge that is the future of gender, it’s going to be one that understands that gender is relative to context,” said author and gender theorist Kate Bornstein at a recent New America event, noting that geography, religion, and family attitudes are all contextual factors that can alter one’s perception of gender as a determinant of identity. As long as we hold onto the notion that gender is a constant, “we’ll keep doing things to keep the lie in place,” she said. But the fact is that “it doesn’t stand on its own, and is always relative to something.” Bornstein argues that the trick to stripping these norms of their harmful power is to mock and expose them for both their flimsiness and stringency.

Which is what photographer Sophia Wallace attempts with her work. Girls Will Be Bois, for example, is a documentary of female masculinity, featuring women who have traditionally “un-feminine” occupations – bus driver, boxer, basketball player – and a sartorial masculinity (baggy pants, and bare-chested). In Modern Dandy, Wallace switches up the way women and men are directed to look at the camera (or not) in photographs – whether to appear submissive (traditionally feminine) or dominant (traditionally masculine). Cliteracy, Wallace’s most recent work, uses imagery of the clitoris and text about female sexuality to illuminate a paradox: we’re obsessed with sexualizing female bodies, and yet the world is “illiterate when it comes to female sexuality.”

But it’s not as bad as it once was. Wallace thinks that photography is evolving – that some gender-focused imagery is less tinged with ignorance today. “There’s so much that I’ve seen that has been hopeful,” she said. “There are actually images of female masculinity, trans-men and trans-women now that didn’t exist when I was in my teens and early 20s. In other ways we have so far to go.”

Part of the struggle of relinquishing gender norms comes from an uncomfortable truth. “Men have everything to gain when we overthrow patriarchy…but they also have something to lose from giving up their traditional masculinity,” said Tavia Nyong’o, an associate professor of performance studies at NYU, emphasizing that male rights vary widely across race and class divisions and that white men have even more to lose than men of color. What do they lose, exactly? Privileges (the ability to open carry a gun and not be worried that they’ll be shot by the police, Nyong’o argued). Control – over political, economic and cultural domains. Access – to networks, jobs and economic opportunities. Put simply, they lose power.

“You walk out the door in the morning with a penis and your income is 20 percent higher on average for nothing that you did,” said Gary Barker, the international director of Promundo, an organization that engages men and boys around the world on issues of gender equality.

When asked whether the future of gender was evolution and extinction, Barker, Nyong’o, Wallace and Bornstein all said they hoped for extinction. But at the same time, each acknowledged how difficult that goal would be to achieve. Beyond the power dynamics, there’s a level of comfort in well-worn identities. “It’s easy to sit in these old roles that we’ve watched and to feel a certain comfort in their stability in a world that feels kind of hard to understand,” Barker said.

Detoxing society requires ripping off a mask of sorts. “It’s about getting as many people as possible to have that Matrix moment, Barker said, when they realize, “wait – [masculinity] isn’t real. It’s all illusory, it’s all performance.”

Elizabeth Weingarten is the associate director of New America’s Global Gender Parity Initiative. This piece was originally published in New America’s digital magazine, The Weekly Wonk. Sign up to get it delivered to your inbox each Thursday here, and follow @New America on Twitter. 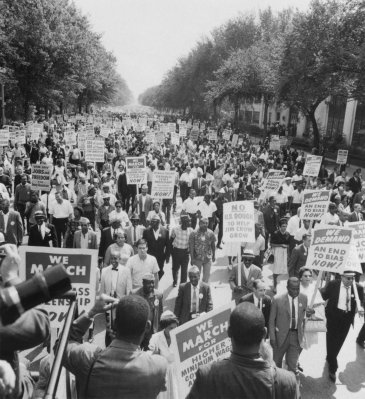 MLK, Civil Rights and The Fierce Urgency of Now
Next Up: Editor's Pick