The True Story Behind American Sniper

In the new Clint Eastwood-directed film American Sniper, Bradley Cooper plays Chris Kyle, the Navy SEAL who was credited with the most confirmed kills (160) in American military history. Kyle went on four tours to Iraq as a Navy SEAL between 2003 and 2009 ,while his wife Taya began to raise their two children at home. Kyle wrote a memoir about his experiences in 2013, also called American Sniper, in which he recounted his deeds and those of his fellow SEALs.

TIME spoke with screenwriter Jason Hall about which parts of the film were drawn directly from Kyle’s life and his autobiography—which we’ll call “fact,” acknowledging that the accuracy of a memoir is subject to the constraints of memory—and which parts were added for the sake of narrative.

Warning: spoilers for American Sniper below

Chris Kyle did bull ride. In his memoir, he recounts traveling from city to city to do so. However, Kyle’s bull riding career ended when he fell off a bronco and was dragged until he became unconscious. The incident left him with pins in his wrists, among other injuries. It was then that he quit—not after a breakup, as is shown in the film.

According to his book, Kyle reported to basic training in 1999. He was born in 1974, which would make him 25 when he enlisted.

The film begins with Kyle forced to make a decision about whether to kill a boy. A boy comes onto a street with marines on it with what looks like a grenade. Kyle must decide whether to take him down. He does. The boy’s mother then picks up the grenade herself, and he kills her as well. Though Kyle’s compatriots congratulate him on the call—the child and mother were indeed carrying a grenade—Kyle struggles with the fact that his first kill was a child.

Though Kyle’s first kill was a woman, according to his memoir, he did not kill her child. He told TIME of the kill in 2013, “I had to do it to protect the Marines, so do you want to lose your own guys or would you rather take one of them out?”

Chris Kyle and his wife Taya married before his first tour

Chris and Taya met just after Chris joined the SEALs, and she did, indeed, throw up the night they first met at a bar. After a whirlwind romance, the two married relatively quickly before his first tour. Taya gave birth to two children, one boy and one girl, over the course of Kyle’s tours.

According to screenwriter Jason Hall, there really was an Iraqi sniper named Mustafa. Like Kyle, his legend grew on the battlefield, with rumors that he could make a shot from over 800 meters. Any impressive sniper shot began to be attributed to him. Chris Kyle does not mention Mustafa in his memoir, though the Iraqi sniper was likely responsible for the death of one of his friends. When Hall asked Kyle about why Mustafa’s name doesn’t appear in the book, Kyle replied, “He shot my friend. I’m not going to put his name in my book.”

In the movie, Kyle goes after Mustafa on several tours and is finally able to kill him at the end of his fourth. In reality, while Kyle said he shot a man he thought was Mustafa, he could not be sure from such a far distance that the gunman was the legendary sniper. He later heard rumors that Mustafa was still alive.

When Taya called Chris in Iraq to tell them that they were having a son, their call did get interrupted by a firefight. At one point, Taya could no longer hear Chris and only heard gunfire. Unlike in the film, Taya did not hear from Chris for five days after that call and thought maybe he was dead.

There was a $20,000 bounty put on Kyle’s head, and enemies were told they could identify him based on the tattoo on his arm. However, Kyle explained in an interview to Conan O’Brien that, even though he stood out from other American snipers because of his tattoo, the reward was offered for any American sniper insurgents could kill.

Kyle and other SEALs pursued a man named “the Butcher”

Kyle never mentions anyone named “the Butcher” in American Sniper. He was created to help give the film a dramatic arc.

After returning home from his fourth tour, Kyle started a company that installed exercise equipment in veterans’ homes. He would also spend time with small groups of veterans, often taking them to shooting ranges, and talking to them about their experiences in war and at home. Many vets credit these trips with Kyle as helping them with their rehabilitation. The mother of a Marine named Eddie Ray Routh heard of what Kyle did for these men and asked him to help her son, who was suffering from PTSD and other issues. They went out to a shooting range together in 2013, and it was there that Kyle and a friend were killed. Routh has been charged with the murders and is scheduled to stand trial next month.

Read next: Review: In American Sniper, Clint Eastwood and Bradley Cooper Are Right on Target 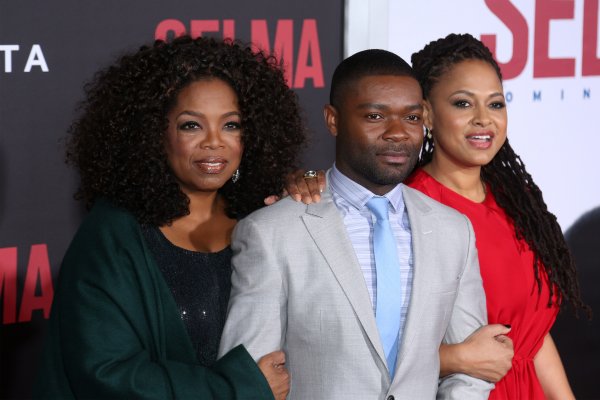 Selma Cast Will March in Alabama to Celebrate MLK Day
Next Up: Editor's Pick