Apple, Facebook, Google and More: Get Ready for Earnings Season

Apple CEO Tim Cook shows off the new iPhone 6 and the Apple Watch during an Apple special event at the Flint Center for the Performing Arts on September 9, 2014 in Cupertino, California.
Justin Sullivan—Getty Images
By Kevin Kelleher

So which will it be? Another banner year for tech stocks, or a period of disappointment? The next couple of weeks will provide investors plenty of clues.

Technology stocks in general enjoyed a good 2014, but the first couple of weeks of the new year have brought a sense of uncertainty. Now, as many companies in the sector gear up for the quarterly ritual of earnings announcements, investors will be scouring numbers for any signs to dispel uncertainty.

Analysts are expecting all earnings in the S&P 500 to rise a mere 1.1% in the quarter, according to Factset. For tech stocks, the growth will be slightly better: up 2.3%. Tech companies themselves aren’t feeling terribly confident: Of the 24 tech companies in the S&P 500 that have offered earnings guidance to investors, only four have given positive guidance, while 20 are taking a more cautious stance.

Factset was forecasting 4% growth in tech earnings and 8% growth for all S&P 500 sectors just a few months ago. But that was before oil prices started to plunge and the economic situation in Europe and Asia started looking as sketchy as it does now. That all adds up to uncertainty, and people tend to brace for bad news when they don’t know what to expect.

However, tech can be a safe haven in bad economic times, as it proved to be fairly resilient during the 2008-09 recession. And with investors’ expectations already lowered, strong earnings in tech could spark a more widespread rally.

The first tech giant to report was Intel. It’s an important company to watch because chipmakers’ orders rely on other tech companies’ plans for growth, making them industry bellwethers.

Intel was an under-performer for years while PC sales were in decline, but that market has finally stabilized after years in freefall. Accordingly, Intel handily beat expectations Thursday, posting Q4 2014 earnings of 74 cents per share, up 39% year-over-year, on $14.72 billion in revenue. Outside the consumer PC market, Intel has been making inroads on chips for mobile devices and sensors powering the Internet of Things, while the growth of cloud computing is creating more demand for its servers.

“The fourth quarter was a strong finish to a record year,” said Intel CEO Brian Krzanich in a statement. “We met or exceeded several important goals: reinvigorated the PC business, grew the Data Center business, established a footprint in tablets, and drove growth and innovation in new areas.”

However, Intel’s Q1 2015 guidance was lighter than expected, sending its stock down about 2% in after-hours trading. That post-earnings decline isn’t good news for other tech companies, because it suggests investors want more than just good news — they want the kind of great news that’ll spark a bigger rally.

The next notable tech names will report on Tuesday, when IBM and Netflix share their financials. This week, three analysts cut their earnings estimates and price target for IBM, following a report in the Register that said the enterprise IT giant is on the verge of its biggest restructuring ever.

Any news on a restructuring will reshape how investors assess IBM’s long-term prospects. But Big Blue’s earnings report may also offer insight on how demand and competition are faring in the enterprise tech market. If IBM’s challenges reflect an industry-wide slowdown, or if its results suffer significantly from the strength of the U.S. dollar, it could signal problems for other multinational enterprise tech stocks.

Meanwhile, Netflix’ earnings could add yet another volatile chapter in that company’s history. Netflix’s stock plummeted 25% last quarter on sluggish subscriber growth. Next week’s earnings could be just as tumultuous: One analyst said the stock could drop 15%, but urged investors to buy anyway because its international growth and original content are looking stronger than ever. To Netflix investors, such wild swings are nothing new.

Tech earnings will heat up in the final week of January when five of the most closely watched tech companies are all slated to report: Microsoft on Jan. 26, Apple on Jan. 27, Amazon and Facebook on Jan. 28, and Google on Jan. 29. Investors will scrutinize each company for different reasons, yet each will add up to a clearer picture of the health of the tech sector.

Some analysts have been increasing their estimates for Apple and Amazon. Not only is Apple valued attractively after several years as a lagging stock, iPhone sales were strong in the holiday quarter. One analyst says the company could vow to return $202 billion in dividends and buybacks in the next two years. Amazon, meanwhile, could pull back on spending, reversing its recent net losses.

For other tech giants, this quarter may show how they are maturing beyond their core markets: Google in search and Facebook in its mobile-feed ads. All are global companies, so the strong dollar could blunt any international growth. But all are consumer-focused, so they may benefit from the extra spending money consumers have left over from falling energy prices.

Public companies disdain the quarterly earnings process, with the open questionings and the swings in stock prices they can bring. But they also offer each other, their customers and shareholders insight into how the industry at large is faring. We got our first peak Thursday, but there’s plenty more to come. 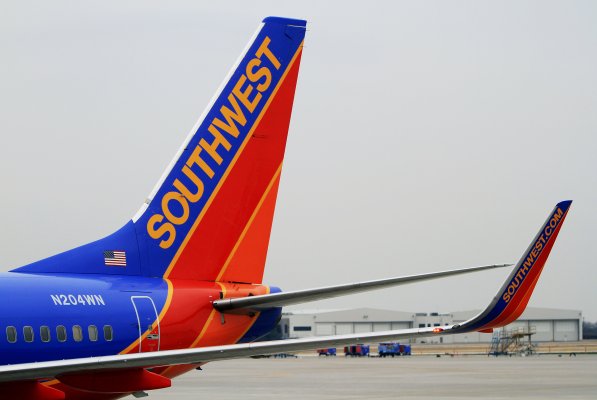 Southwest to Pay Record $1.6 Million Fine For Airplane Delays
Next Up: Editor's Pick