Mitt Romney Faces Skepticism, Frustration as He Looks to 2016

When former Mitt Romney steps across on the deck of the U.S.S. Midway on Friday evening, the former GOP presidential nominee who is considering a third bid for the White House will be greeted by many skeptical faces from his party’s leadership.

Four years after the Republican establishment’s support propelled him to the nomination, many members of the Republican National Committee are telling him to step aside.

A week after Romney allies and donors sent the strongest signal yet that he is exploring a third bid for the White House, Romney aides announced Thursday that Colin Reed, the campaign manager for former Sen. Scott Brown’s New Hampshire Senate race, was joining Romney’s team in a volunteer capacity. But at the GOP’s winter meeting, many in the Republican Party elite expressed frustration with the way their former nominee has conducted himself. Last year, Romney repeatedly ruled out running again, but has sent signals that he is seriously considering doing so, scrambling the equation for donors, operatives and supporters who previously supported him but interpreted his denials as a license to explore supporting other candidates.

“Obviously, I think all of us feel like if he had been elected in 2012, the country would be in much better shape,” said John Ryder, the party’s general counsel and the committeeman from Tennessee. “He’s got to make a case as to why this time would be better than the last time, and how he can reclaim the loyalty of some of the folks who have started to drift off.”

“[Romney] doesn’t clear the field for anyone,” he added.

Henry Barbour, the committeeman from Mississippi and one of the authors of the party’s autopsy that was sharply critical of the previous Romney effort, said, “clearly getting past 2012 is going to be his challenge.”

Romney faces lingering frustration from some in his party that he spoiled an opportunity to defeat President Barack Obama.

“When he went into that race, people thought there was a very good chance for Republicans given the state of the economy and it looked like it should have been the Republicans to lose, and he did,” said Maine party chairman Rick Bennett. “He needs to find a way to answer that.”

“Governor Romney is a good man,” echoed South Carolina chairman Matt Moore. “But my question is, ‘how would this campaign be different than 2012″‘ Because if everything is the same, the result will be the same.”

Republican leaders expressed doubts that Romney could reverse the public perception that his wealth has placed him out of touch with ordinary Americans, while worrying that lingering controversies over his suggestion that illegal immigrants “self-deport” and that 47% of Americans “believe that they are victims” would set the party back in its efforts to rebrand.

Steve King, the committeeman from Wisconsin, said Romney’s candidacy could undermine Republican efforts to put a new face on the party. “We need freshness. If Mitt Romney wants to win he’s going to have to figure out how to be fresh,” he said.

Romney supporters on the committee have been making the case that his name recognition and experience make him the ideal candidate to take on former Secretary of State Hillary Clinton, adding that he has been vindicated on some foreign policy issues. But their behind the scenes efforts to convince RNC members to keep an open mind are falling on many deaf ears.

“I think the party wants to see a new candidate,” said Pennsylvania chairman Rob Gleason. “The people here want to see someone new,” he added, of the RNC membership. “I think the whole country is looking for someone new.”

One RNC member from the South said nominating Romney again would be tantamount to electing Clinton. “We may be saddled with that again,” the member said on the condition of anonymity, “but if we are, then we better be making provisions for Hillary.” 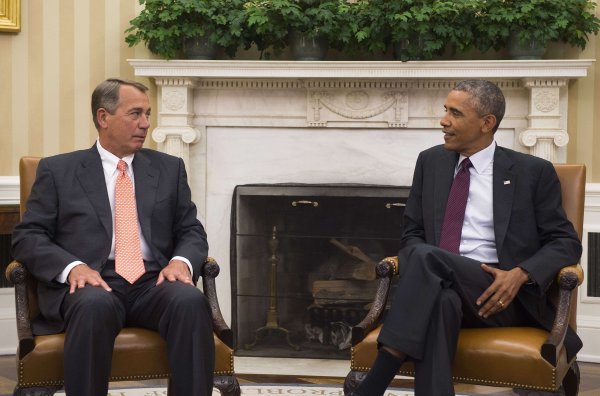 Republicans Want to Give President Obama More Power
Next Up: Editor's Pick