Model Ashley Graham, who has appeared in Vogue and Elle, lambasted Hollywood’s treatment of women’s bodies in an essay for Net-a-Porter’s online magazine, The Edit.

The model, who is a size 14, writes: “I think that you can be healthy at any size and my goal is to help and educate women on that. It doesn’t matter if you’re a size 2 or 22 as long as you’re taking care of your body, working out, and telling yourself, ‘I love you’ instead of taking in the negativity of beauty standards.”

Though she acknowledged that Hollywood starlets like Marilyn Monroe and Jennifer Lopez have worn their curves with confidence over the years, Graham said she thinks that girls need to see more women on TV and in magazines who have healthy figures. “Young girls don’t have much to look at, curvy women are not on covers of magazines, they’re not talked about on social media as much as other celebrities. Jennifer Lawrence is the media’s poster girl for curves — she’s tiny!”

Lawrence has spoken in the past about how she was told she would lose a job if she didn’t diet, to which she replied, “You can go f-ck yourself.”

Read next: Fargo’s Allison Tolman on How to Fix Hollywood’s Body Image Problem 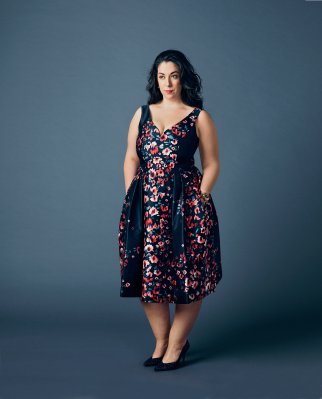 See How 6 Women Got Over Their Body Image Issues
Next Up: Editor's Pick