Oscars 2015 Nominations Analysis: Who Will Take Home the Awards?

This time, the Motion Picture Academy decided, eight was enough. After five years when the Best Picture category allowed for nine or 10 nominees, the Oscars went for a svelter look this year, which it achieved by saying no to those rich meals that audiences love: hit movies. No Gone Girl, Interstellar or, heaven forbid, Guardians of the Galaxy. The pure-nutrition platter the Academy provided this morning will make Oscar Night (Feb. 22) just another Independent Spirit Awards.

This was an unusually schizophrenic shortlist — a reminder that some 6,000 Academy members fill out ballots and have trouble agreeing with each other or possibly themselves. American Sniper cadged nominations for Picture, Actor (Bradley Cooper) and Adapted Screenplay (Jason Hall) but not for Clint Eastwood, its legendary 84-year-old director.

Foxcatcher, the bleak true-life tale of zillionaire John DuPont and the Olympic Gold-medal wrestlers Mark and Dave Schultz, earned citations for director Bennett Cooper, writers E. Max Frye and Dan Futterman and stars Steve Carell (DuPont) and Mark Ruffalo (Dave Schultz) but not for Best Picture. Selma, which portrays Martin Luther King Jr.’s organizing of the Alabama marches that spurred President Lyndon Johnson to press Congress to pass the Voting Rights Act of 1965, got a nomination for Best Picture, but not for its star (David Oyelowo), screenwriter (Paul Webb) and director (Ava DuVernay).

Life Itself, the Roger Ebert biography that is the year’s definitive portrait of heroic movie love, got left off the Documentary Feature list. And in a Fraud at Polls shocker, The LEGO Movie, which any critic or child could tell you was the year’s best Animated Feature, got shut out of that category’s five nominees. No candy, kids. Eat your spinach and watch Whiplash.

Here’s our analysis of the nominees in six major categories, with the early pick for the winner in bold.

If your jock friends ask you who J.K. Simmons is, tell them he’s the friendly guy in the Farmers Insurance commercials that have saturated every NFL playoff game of the past few weeks. He’s also a terrific actor who has shone on Broadway (Captain Hook opposite Kathy Rigby in Peter Pan), in movies (Peter Parker’s newspaper editor in the Tobey Maguire Spider-Man trilogy) and every kind of television (including as a pompadoured host back when AMC lived up to its full name: American Movie Classics). Whiplash, which also earned director Damien Chazelle an Adapted Screenplay nomination, earned only $6 million at the domestic box office, but those who saw it audience knew that Simmons gives an explosive, finely calibrated performance as the sadistic teacher to Miles Teller’s drummer prodigy.

Simmons, who turned 60 last week, now finds himself a newborn star. After winning this category in 75% of all critics groups, he snagged a Golden Globe last weekend and has no, repeat no, serious competition for the Oscar. It’s his. In a Simmons-less year, Norton might have won. His wily work as Michael Keaton’s chief rival in Birdman is at once funny, scary and sexy.

Snubs: Albert Brooks as the wise old consigliere in A Most Violent Year? James Brolin as the splenetic cop in Inherent Vice? Maybe Channing Tatum, who plays Ruffalo’s wrestling brother in Foxcatcher? I’m floundering, really. It was a thin category this year.

Expect another runaway winner: Arquette for allowing herself to age, not gracefully but naturally, over the dozen years of shooting Richard Linklater’s family saga, and for making her character the movie’s narrative fulcrum; another name for the film could have been Momhood. Other shortlisters included Dern as Reese Witherspoon’s doomed, adoring mother, Stone as Michael Keaton’s rehabbing daughter and Knightley as Benedict Cumberbatch’s “love interest.” Streep was the Into the Woods Witch — first an aged crone, then a sexy young thing — and she sings, too. But she’ll be part of the choir on Oscar night, when Patricia gets a statuette named Arquette.

Two distinguished young Brits have been locked like accidentally conjoined twins as the stars of their complementary biopics: Cumberbatch as Alan Turing, the maths genius who helped win World War II by breaking the Nazis’ Enigma Code, and Redmayne as later Cambridge University cosmologist Stephen Hawking. They both made the cut, along with Cooper, as Navy SEAL sharpshooter Chris Kyle, and Carell. In competition with four biopic stars, Keaton ought to triumph — especially since his Birdman character, a has-been movie actor who long ago played a comic-book movie hero, reflects Keaton’s own bioperse as the star of Tim Burton’s Batman movies more than 20 years ago.

Snubs: Jake Gyllenhaal seemed a dead cert as the creepy news-cameraman in Nightcrawler, but lost out to Carell’s nutsy plutocrat and his funny nose. David Oyelowo not only brought a politician’s canniness to his Dr. King role, he brought DuVernay in to direct it. Yeah, well, boo-hoo, says the Academy — which for only the second time in 14 years nominated no actor or actress of African heritage.

A brief note on some other white people: With Hawke and Arquette nominated for Boyhood, didn’t Ellar Coltrane, who devoted two thirds of his life (ages six to 18) to this project, deserve not only love but respect for carrying the movie that is now the frontrunner for Best Picture?

Cotillard is one of only two women to win a Best Actress Oscar for a performance in a foreign language: as Edith Piaf in La vie en rose seven years ago. (The other was Sophia Loren in Two Women, 1962.) She finished second in the critics-groups’ year-end tabulation, just behind Pike, but was thought a long shot for the Academy shortlist as the Belgian worker pleading to get her job back. Cheers to the members for watching a movie with subtitles — and for recognizing the delicate power in Jones’ role as Stephen Hawking’s wife Jane. Witherspoon, an Oscar winner in 2006 for Walk the Line, was an easy pick in a virtual one-woman show about a Pacific Coast hiker on a painful inner journey.

Pike, the little-known English blond whom director David Fincher gave a shot at stardom in Gone Girl, is the only representative in any acting category of a movie that became a popular hit ($167 million at home, nearly $200 million more abroad). But that’s unlikely to vault her, or the other finalists, over Moore. With four previous Oscar nominations, she’s due. Moreover, as a college professor suffered from early-onset Alzheimer’s, she’s great.

Snubs: I hope Amy Adams enjoyed her Golden Globes party — and Comedy of Musical Actress win, as painter Margaret Keane in Big Eyes — because the five-time Oscar nominee got stiffed this morning. Emily Blunt deserved a nomination for lending voice and plangent heart to the Baker’s Wife in Into the Woods; boo-hoo for her. Jennifer Aniston had strenuously deglamorized herself for her role in Cake as a woman with chronic pain syndrome in a little-seen drama that somehow pulled a Golden Globe nomination. The Academy members were less impressed by Aniston’s performance. On Oscar night, they said, let her eat Cake at home.

Recently, the five Director nominees have been drawn from the larger list of Best Picture finalists. That didn’t happen this year, as Miller nudged out (I’m guessing) Eastwood. The wild, verdant imaginations of Anderson and Iñárritu will not win them this award: Budapest may get Best Original Screenplay, and Birdman might have to settle for Keaton’s Best Actor award. Linklater should win for Boyhood.

Snubs: With eight nominations for Best Picture and only five for Director, this is the Academy’s truly elite category. And, like a gentleman’s club with a restricted membership, it still doesn’t admit black women. Ava DuVernay surely proved her bona fides with Selma: she pushed a stalled project into production, got an epic vibe on a $20-million budget, expertly managed dozens of speaking parts and marshaled hundreds of extras — all that stuff usually considered the job of real men. But the Academy must have thought this achievement wasn’t as hard as Tyldum’s. The Norwegian director got Benedict Cumberbatch to give a really good performance!

BEST PICTURE Nominees: American Sniper. Birdman or (The Unexpected Virtue of Ignorance). Boyhood. The Grand Budapest Hotel. The Imitation Game. Selma. The Theory of Everything. Whiplash.

As a critic who likes to see his personal prejudices validated by others, I can’t complain about this Gang of Eight: six of the movies made my lists of 10 best films or performances. But basically the Academy served up one unabashedly Hollywood movie, American Sniper, and seven art-house films. Of these, the most cinematically wondrous is The Grand Budapest Hotel. And the marathon of warmth, growing pains and family values is Boyhood: your Oscar winner for Best Picture.

Snubs: Foxcatcher, one of the year’s few Oscar-y biopics that didn’t aim for inspiration, won a Director’s prize for Miller at Cannes last year, and a Director’s nomination here, but was too chilly and remote to find either a substantial audience — only $8.8 million at the domestic box office — or a rooting interest from the full Academy membership that votes for Best Picture. Angelina Jolie’s Unbroken, perhaps the most eagerly anticipated of the late-year biopics, did connect with paying customers: $103 million in its first three weeks of release. But this epic of a soldier’s endurance on land and sea in World War II disappointed most critics and, obviously, the Oscar voters. And Nightcrawler was the only end-of-year contender that was not a biopic. Its deft portrait of a sociopath on the rise may have troubled Academy viewers. Not being able to embrace Gyllenhaal’s winsome creep, they punished him and the movie. These are the Oscars, Jake and writer-director Dan Gilroy. Next time, mind your manners and wear tuxedos.

Correction: An earlier version of this story misstated the nationality of the director Morten Tyldum. He is Norwegian. 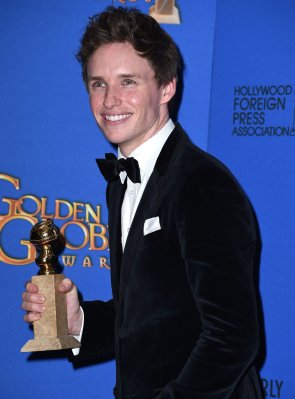 Eddie Redmayne and Benedict Cumberbatch Are Oscars Texting Buddies
Next Up: Editor's Pick