GOP Censures Member for Racist Posts and Calls for Resignation

In a closed-door vote in San Diego, the Republican Party leadership also demanded the resignation of Dave Agema, the Michigan national committeeman whose controversial statements have been a thorn in the side of the GOP as it seeks to rehabilitate its image with minority voters.

“Dave Agema’s history of harmful and offensive rhetoric has no place in our party, which is why the RNC executive committee acted in the swiftest way possible to avoid giving him a platform,” Chairman Reince Priebus said shortly after the vote. “We have voted to censure him, and we are urging the Michigan GOP and their voters to explore options to discipline Agema for his actions. Today, we used all available tools to remove him from the committee.”

In recent years, Agema posted an article on his Facebook page that describe gay people as “filthy,” followed with posts supporting Russia’s anti-homosexuality laws and questioning whether Muslim-Americans have ever contributed to American society. The latest effort to unseat Agema began on New Years Day, when Agema reposted an article from a white supremacist magazine that he called “very interesting.”

For more than a year, Agema has refused calls from local officials and Priebus to step aside. On Wednesday, Wisconsin Gov. Scott Walker, a 2016 hopeful who will address the committee Thursday evening, added his name to the chorus. Republican Party rules do no permit the national party to remove a committee member from office.

The party’s autopsy into Mitt Romney’s loss in 2012 urged the GOP to launch an intensive effort to engage with communities who have traditionally voted for Democrats, a campaign that saw modest gains in the 2014 midterm elections. Party leaders believe Agema has become a distraction.

On Tuesday, Virginia GOP Chairman Pat Mullins penned a letter to all 168 members of the RNC that urged action against Agema.

“We know what we need to do, and the communities we need to get into, and we’re geared to 2016,” Mullins said during the vote. “So having statements like this being made by a partly leader in Michigan doesn’t help us at all.”

After the vote, Priebus said, “we cannot allow one man’s fringe views to undermine the work that is ahead of us.”

Michigan GOP Chairman Bobby Schostak, a member of the Executive Committee, said in a statement Wednesday that he supports the anti-Agema effort: “My position remains unchanged from a year ago, I hope Mr. Agema will voluntarily resign, but if he does not, The Michigan Republican Party will continue exploring all possibilities to address the actions of Michigan’s current Republican National Committeeman.”

Agema traveled to San Diego for this week’s GOP Winter Meeting. Whether he will heed the new calls to step down remains unclear.

Mullins said if Agema does not resign by Friday, when the full RNC will meet in a general session, he hopes the full body will move to censure Agema and again call for his resignation. 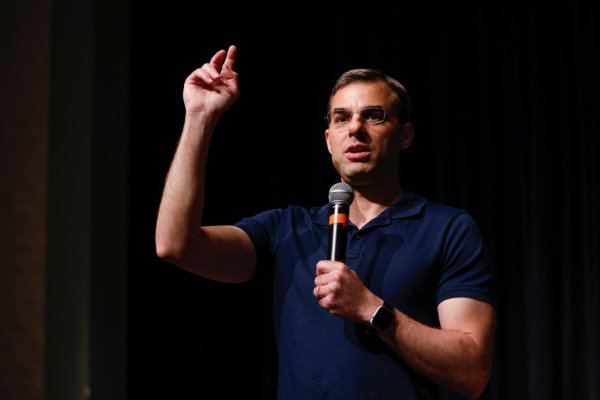 ‘I Think My Approach Is Better Now.’ Allow Ex-Republican Justin Amash to Reintroduce Himself
Next Up: Editor's Pick