Missing-Jet Familes Vent Their Grief Outside Malaysian Embassy in Beijing

A relative of passengers on the missing Malaysia Airlines Flight 370 cries as she participates in a protest outside the Malaysian embassy in Beijing on March 25, 2014
AFP/Getty Images
By Emily Rauhala / Beijing

In the parking lot of Beijing’s Metropark Lido Hotel, a woman is looking for her son. Nineteen days ago he boarded a flight from Malaysia. He never made it home. Now she is searching, wild with grief, for any sign of him. She walks in circles. She shuffles up to strangers and searches their eyes.

“Rest,” a relative tells her, “drink some water.”

“Nothing is certain is yet.”

Nothing is certain yet. For the families of the Chinese passengers aboard Malaysia Airlines Flight 370 that is the mantra. They have spent the past 19 days locked in limbo. Now, the Malaysian government says that the plane was lost, that nobody survived.

On Monday night, Malaysian Prime Minister Najib Razak announced that information from satellites proved that the plane went down in the water, citing fresh data analysis by British firm Inmarsat. “It is with deep sadness and regret that I must inform you that according to this new data Flight MH 370 ended in the southern Indian Ocean,” he said.

On Tuesday, details were still scarce. At a press conference in Kuala Lumpur, Malaysia Airlines officials would not comment on what happened to the plane, which departed from the Malaysian capital and was bound for Beijing with 239 people aboard, on March 8. “We do not know why, we do not know how the terrible tragedy happened,” said the airline’s chief executive, Ahmad Jauhari Yahya. But he stood firm on the fact that the search for survivors was over. “It is a reality we must face and we must accept.”

The relatives are not convinced. On Tuesday morning, family and friends of the passengers gathered in the Metropark hotel’s lobby before setting out for the Malaysian embassy in Beijing. They wore matching white T-shirts with the words “Come home safely” on the front and “Pray for MH370” on the back. Some carried signs. “Malaysia Airlines you owe us answers,” one read.

Deputy Foreign Minister Xie Hangsheng echoed their sentiments. “We demand the Malaysian side make clear the specific basis on which they come to this judgment,” he was quoted on China’s Foreign Ministry website Tuesday.

But answers are hard to come by. Like much of what has happened here over the past two weeks, the trip to the embassy was chaotic. The families were led through a wall of SWAT teams and boarded onto buses. The buses did not leave. A rumor swept through the crowd that Chinese officials decided against a protest, and that they would be turned back. Furious, some pushed ahead on foot.

Just a kilometer or so south, in one of the capital’s glossy diplomatic districts, Chinese security officials were sealing off roads to the Malaysian compound. Uniformed police and plainclothes officers with video cameras lined the street. About 20 to 30 people hurled water bottles at the building, demanding to speak to the ambassador, according to witnesses. But the police stood resolute, and after a few hours the families filed onto buses and were taken away.

The security presence might seem extreme, but aggressive crowd control is common in China. The ruling China Communist Party is wary of mass gatherings of any sort, let alone protests, and information about major accidents is often censored. In 2011, a high-speed train crashed outside Wenzhou, killing 40 and injuring 200. In the aftermath, relatives of the victims alleged a cover-up.

With the anger directed at the Malaysian government and Malaysian Airlines, not China, the government seems willing to allow the grieving families to express some anger — so long, it seems, as they do so out of view of the world’s press. By mid-afternoon, at least 100 police officers had entered the Metropark hotel, but reporters with cameras were stopped at the door.

In Perth, Western Australia, search teams are waiting for a break in the blustery weather before efforts can resume some 2,350 km (1,460 miles) to the southwest. Satellite images of suspicious flotsam emerged from U.S., Chinese and French sources late last week and, on Monday, Chinese and Australian aircraft spotted two debris fields, some 40 km (25 miles) apart. However, no flotsam has yet been confirmed as coming from the missing Boeing 777-200.

Despite the sightings, Australian officials have been quick to emphasize the arduous task ahead. “We are not searching for a needle in a haystack,” said Mark Binskin, vice chief of the Australian Defense Force. “We are still trying to define where the haystack is.” But forecasters believe the gale-force winds, heavy downpours, low cloud and 6-m (20 ft.) waves that hamper the air and sea search may lessen soon.

For the relatives, the next step will likely be to visit the supposed crash site, a place Australia’s Defense Minister David Johnston described as “one of the most remote parts of the planet.” Once confirmed, Malaysia Airlines says it will arrange transport and has offered a preliminary $5,000 per lost passenger. Australian authorities will waive visa fees.

All this means so little to those who have been suddenly declared bereaved. Walking toward the embassy, one relative carried a sign addressed to a missing child. “Mommy and Daddy’s hearts are broken,” it said. “Come home soon.” 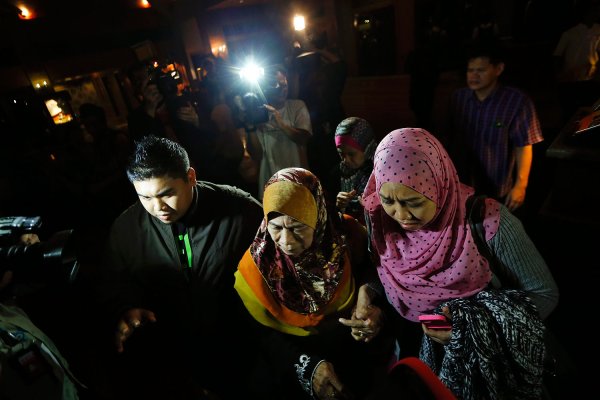 Lost But Not Found
Next Up: Editor's Pick