Why Doesn’t America Have Its Own Charlie Hebdo?

William M Gaines, the publisher of 'Mad' Magazine, lies on the pavement during a promotional tour in London on Sept. 2, 1971
Popperfoto/Getty Images
By Sascha Cohen

After last week’s terrorist attack on Charlie Hebdo, a French satirical newspaper, the U.S. media had to publish several articles explaining to Americans what kind of paper Charlie is, and why it’s so controversial.

It wasn’t just a matter of readers being unfamiliar with the title of a foreign-language newspaper. Rather, the whole idea of Charlie Hebdo is foreign to American readers, because no real equivalent exists. Topical, political humor is popular in the U.S., but in recent years it has been more common on television programs — like South Park, The Daily Show and The Colbert Report — than on the printed page.

This was not always the case. In fact, print satire flourished in the U.S. between the 1950s and the 1970s, with the creation of humor magazines like MAD, Monocle, The Realist and The National Lampoon — but a combination of timing and tradition has meant that the medium is, for most American readers, a matter of history.

A half-century ago, those publications featured parody articles, jokes, cartoons, comic strips and colorful, sometimes explicit cover images, as contributors experimented with boundary-pushing content. There was a sense, during the social upheavals of the 1960s, that satire was transforming along with the country. As a 1964 essay from TIME put it, American humor had “shed its inhibitions” in terms of addressing once-taboo topics like sex and death, since contemporary audiences were “largely unshockable.”

MAD, founded in 1952 by William Gaines and Harvey Kurtzman, began its run by publishing distinctly liberal satire during a decade of supposed political consensus. The magazine’s early contributors, most of whom were the sons of European Jewish immigrants, used their perspectives as cultural outsiders to skewer McCarthyism and the climate of paranoia that accompanied the Cold War. During the 1960s, MAD became a hallmark of the counterculture; cartoonist Art Spiegelman characterized the magazine as instrumental in shaping the generation that protested Vietnam, and SDS activist Tom Hayden has stated that his own radical journey began with MAD. The magazine boasted peak circulation figures during the 1970s, selling between one and two million copies per issue. But by this time, MAD had expanded its targets, mocking the hippies and the establishment with equal vigor, operating under a code of humor in which no point of view, left or right, was immune to ridicule. Although it is one of the few humor magazines still in print today, MAD’s readership shrank significantly after the departure of editor Al Feldstein in 1984, after which the publication adopted a more corporate structure and began to accept advertisements, ultimately leading fans to complain that it had lost its edge.

Monocle, a quarterly satire magazine created by a group of Yale law students in 1956, was less financially successful than MAD but equally fearless in attacking the conformity of the postwar era. If nothing else, Monocle stood out from other humor publications in that it frequently featured the work of female contributors, including Nora Ephron. A 1964 article from TIME described Monocle’s main targets as “politics, pettifoggery, and government,” although the writers also tackled literary trends and race issues in America. The staff of liberal Democrats most often ridiculed conservative figures and groups, including Richard Nixon, William F. Buckley, the John Birch Society and Barry Goldwater. Editor Victor Navasky saw this work as a form of political dissent, and told TIME that he found society “too grim and absurd” not to satirize. (Navasky later went on to edit The Nation.)

The National Lampoon ran from 1970 to 1998, founded by a group of Harvard graduates who had worked together on the Harvard Lampoon, the university’s storied undergraduate humor magazine. Like MAD, the National Lampoon mocked political figures, consumer products, popular entertainment and cultural fads, but its tone was more caustic, and its images more sexually explicit. A 1973 TIME article characterized the Lampoon’s brand of satire as “jejune penetrations of the frontiers of bad taste.” The political stance of Lampoon contributors ranged from anarchist to libertarian, although the editorial team always insisted that it prioritized selling copies over offering any type of cohesive political statement. The most controversial Lampoon cover came from its January 1973 “Death Issue,” and featured a photograph of a dog with a revolver pointed at his head. “If You Don’t Buy This Magazine, We’ll Kill This Dog,” the text read. This was provocation for the sake of provocation – incidentally, the same sort of gimmick that some observers associate with Charlie Hebdo’s content.

Perhaps the satire magazine that most closely resembles Charlie Hebdo in terms of inflammatory imagery was The Realist, created by Paul Krassner in 1958. The most notorious items from this publication appeared in 1967, including the “Disneyland Memorial Orgy Poster” an illustration of classic animated Disney characters engaged in a variety of obscene acts, and “The Parts that Were Left Out of the Kennedy Book,” a graphic short story containing a scene in which Lyndon B. Johnson sexually penetrates John F. Kennedy’s corpse. Despite a set of contributors that included Mort Sahl, Woody Allen, Jules Feiffer and Richard Pryor, this magazine remained part of the “underground” American press, never reaching a mass audience the way that MAD or the Lampoon did.

Still, whether underground or mainstream, none of these magazines traded in the type of attacks on religious leaders and beliefs that Charlie Hebdo is known for, and this is one element that truly distinguishes print satire in the U.S. from its counterpart across the Atlantic. American humorists have violated virtually every conceivable taboo relating to sex, violence and politics, unafraid to confront powerful institutions and individuals. But, with a handful of polarizing exceptions, all of them performers — Lenny Bruce, Bill Maher, Penn and Teller — they have largely refrained from attacking religious faith with the same hostility as Charlie Hebdo does. (Trey Parker and Matt Stone’s “Book of Mormon” musical, while gently poking fun of organized religion, ultimately struck audiences as “sensitive” and “sweet.”)

Why? First of all, America does not share the French republican tradition of anti-clericalism. Whereas secularism is a deeply-rooted, cherished aspect of French culture, in America, religious tolerance — in theory, if not in practice — has long been touted as a national value and atheists remain the most “distrusted group” in America. There is also the question of medium: prioritizing the printed page as a vehicle for sacrilegious expression is part of France’s revolutionary history. In the United States, television and stand-up comedy have arguably eclipsed the press as our preferred forums for sparring and provocation. Finally, during the heyday of American print satire — the 1950s through the 1970s — the arenas of sex and politics, on their own, offered more than enough volatile comedic fodder for satirists to exploit.

Perhaps The Realist, the Lampoon, and Monocle would mock radical Islam if they still existed today. We cannot know for certain. Instead, we’re left with a long history of scathing cartoons about living Presidents, dead Presidents and Mickey Mouse, while for caricatures of religious figures — for those who are into that sort of thing — we must look to France.

Sascha Cohen is a PhD candidate in the history department at Brandeis University. Her dissertation explores American humor in the 1970s and 1980s. Her own satirical writing can be found in McSweeneys.

Correction: The original version of this story misstated the year National Lampoon stopped publishing. It was 1998. 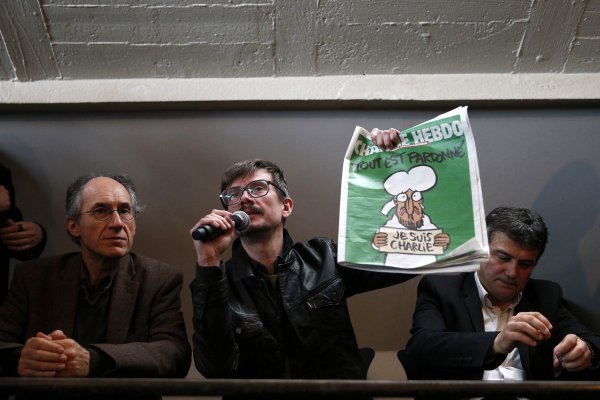 We Should Be Laughing at Charlie Hebdo, Not Pledging Our Allegiance to It
Next Up: Editor's Pick