A new Google Translate update released for Android and iOS Wednesday should let you have more seamless conversations with people speaking other languages, Google says, as well as translate road signs on the fly using your phone’s camera.

The new functionality seems almost like it’s beamed in from the future, but does it actually work? We took the new features for a spin to find out.

Google Translate on Android was already pretty sophisticated, allowing users to conduct conversations across languages by alternating between two language detection modes. But the new update makes real-time conversations even more seamless. When the app is in listening mode and set to translate between a pair of languages, you can simply place your phone between two people and speak normally. The app can naturally detect which of the two languages you’re speaking on the fly. After you say a sentence, the app will present a written translation and speak the words in the foreign language as well.

In our tests using a high-end Moto X smartphone, the app was able to translate several sentences flawlessly when I spoke with a colleague fluent in French about Paris. Some sentences came back in English somewhat garbled (“what you eat and when you were there” instead of “what did you eat when you were there”), but for the most part it was pretty easy to maintain a dialogue using context clues.

A conversation with a Spanish speaker didn’t go as well — but the speaker in our test wasn’t fully fluent. The app seemed to get tripped up several times by her American accent. It had a difficult time differentiating between words that are similar in Spanish but wildly different in English (for instance, the app several times interpreted Sí, which means yes in Spanish, as Si, the Spanish word for if, or the letter “C” in English). For this conversation we had to hold the phone up to our mouths, using it more like a traditional microphone. It seems likely that the app is more attuned to native speakers of particular languages.

Translations in Spanish, French and English alike fell apart pretty quickly if we tried to move beyond simple sentences. The app isn’t good at interpreting a pause in speech as a period ending a sentence or a comma before a new clause. So while conversations are “real time,” they’re a bit halting as you wait for the translations, and they have to be simple so as not to confuse the app.

The translations also often skipped over a lot of proper nouns, including relatively simple names like Jonathan. And like all voice-recognition apps, it worked best in a quiet space, which may not always be available during real-world use.

The update also introduces a nifty new feature to translate text in the real world using a camera phone. Previously, users had to take a snapshot, wait for the app to scan all the text within the frame, and then see the translations. Now, the app can translate text on the fly. A “Stop” sign changes to a “Parada” sign before your eyes. The feature also works pretty well for itemized lists (like restaurant menus), but it gets finicky when you try to translate a whole block of text.

Overall, the new features would make Google Translate a great companion for a trip abroad. The app seems useful for handling simple requests, like asking for directions or ordering a meal. It can’t fully shatter a language barrier, but for two people who don’t speak each other’s language at all, it would certainly create a bridge toward understanding.

Our biggest request, however: a button you can press to explain what the app does in any language, so people won’t freak out when you try to shove a smartphone in their face. 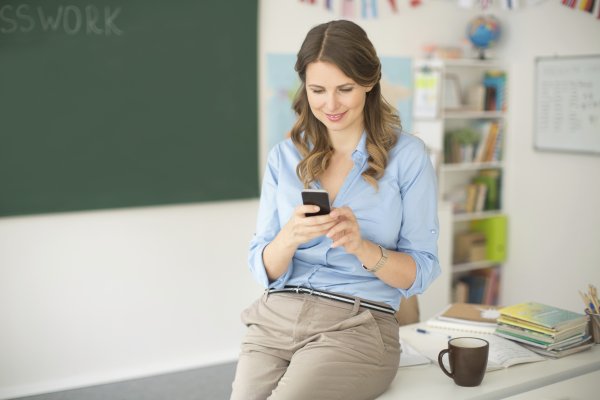 Google Is Bringing the Paperless Classroom to Teachers' Phones
Next Up: Editor's Pick