Members of the GIPN and RAID, French police special forces, walk in Corcy, northern France, on January 8, 2015 as they carry out searches as part of an investigation into a deadly attack the day before by armed gunmen on the Paris offices of French satirical weekly Charlie Hebdo.
FRANCOIS LO PRESTI—AFP/Getty Images
Ideas
By John Mueller and Mark Stewart
John Mueller is a political scientist at Ohio State University and a senior fellow at the Cato Institute. Mark Stewart is an engineer and risk analyst at the University of Newcastle in Australia. They are the authors of Terror, Security, and Money: Balancing the Risks, Benefits, and Costs of Homeland Security and of the forthcoming Chasing Ghosts: The Costly Quest to Counter Terrorists in the United States.

In the wake of the tragic shootings in Paris, French police and intelligence agencies are being asked to explain why known militants—including one who had visited an al-Qaeda affiliate in Yemen several years ago—were not subject to intense surveillance before they launched last week’s terrorist attack at the offices of a French satirical weekly.

The answer is fairly simple, if less than satisfying: it costs a lot of money to do so. A perhaps somewhat high estimate is that the full-scale surveillance of an individual for a year costs some $8 million. The costs of watching even 125 people in that way would add up to $1 billion—a sum that is one-third of the entire FBI counterterrorism budget.

French police believe that, among prisoners alone, 200 would “merit attention” and 95 would be “dangerous” once released.

Nor is malpractice evident in the fact that the surveillance of some terrorist suspects is relaxed over time. Very often, would-be terrorists lose their enthusiasm for the enterprise. As terrorism specialist John Horgan has pointed out, walking away from terrorism is a common phenomenon. It is not that they necessarily abandon their radical views, but that they abandon violence as a means of expressing them.

Policing agencies must therefore pick and choose carefully. At any one time there could easily be thousands of plausible candidates for scrutiny, and many of them may well seem to be more threatening those who actually committed terrorist mayhem in Paris.

Under the influence of what might be called “the 9/11 Commission Syndrome,” in which all terrorism leads are supposed to be followed up on, government agencies chase more than 5,000 “threats” in the United States every day. The vast majority of this activity leads, of course, to nothing, and the massive enterprise is often called “ghostchasing” in the FBI, an agency that may have pursued well over 10 million leads since 2001.

The enterprise leads to only a very small number of productive investigations—there are only 100 or so arrests on terrorism charges in the United States each year, and most of these are of would-be terrorists who are either trivial or at most aspirational. However, in addition, there will be a considerable number—thousands or even tens of thousands—who are deemed suspicious enough to watch. At that point, budgetary considerations must necessarily come into play. Investigators can afford to give only a few the full surveillance treatment.

When something like the French tragedy happens, policing and intelligence agencies are urged to work even harder to ferret out potential terrorists in our midst—in other words, to heap even more hay onto the haystack. That is certainly an understandable reaction, but it almost never comes associated with even the barest elements of a rounded analysis. This should begin not with the perennial question “Are we safer?” but rather with one almost never asked: “How safe are we?”

On average, one or two people have perished per year since 2001 at the hands of Islamic terrorists in the United States and in France, less than that in Canada and Australia, a bit more in the United Kingdom. Under present circumstances, then, the likelihood a citizen in those countries will be killed by a terrorist is one in millions. Whatever the fears of French police and however wrenching the last week has been, terrorism in their country, looked at rather coldly, has not resulted in many deaths.

The question then becomes, as risk analyst Howard Kunreuther put it shortly after 9/11, “How much should we be willing to pay for a small reduction in probabilities that are already extremely low?”

In seeking to answer that key question, it should be kept in mind that terrorism often exacts considerable political, economic, emotional, and psychic damage that may not be inflicted by other hazards, natural and unnatural. Moreover, it is worth considering that terrorism in the developed world might suddenly increase in frequency and intensity. However, this would be a sharp reversal of current patterns, and the terrorist surge would have to be massive to change the basic calculus.

As with crime, perfect safety is impossible, a rather obvious point that is nonetheless often neglected. Funds directed at a hazard that kills few might sometimes be more productively directed at one that kills many.

John Mueller is a political scientist at Ohio State University and a senior fellow at the Cato Institute. Mark Stewart is an engineer and risk analyst at the University of Newcastle in Australia. They are the authors of Terror, Security, and Money: Balancing the Risks, Benefits, and Costs of Homeland Security and of the forthcoming Chasing Ghosts: The Costly Quest to Counter Terrorists in the United States. 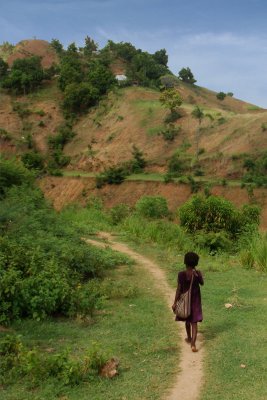 What Haiti Needs to Do Next
Next Up: Editor's Pick