Reince Priebus, Chairman of the Republican National Committee, participates on a panel at the Conservative Political Action Conference at the Gaylord National at National Harbor, Md., March 8, 2014.
Ron Sachs—CNP/AdMedia/Corbis
By Zeke J Miller

In a move unprecedented in recent memory, members of the Republican National Committee will gather this week to consider voting to expel one of their own.

The target of their ire: Dave Agema, the national committeeman from Michigan, who has endorsed racist and homophobic material on social media and who has refused multiple calls to resign from his party leadership post.

“It is time for us to take a stand against Dave Agema, the national committeeman from Michigan, who continues to disgrace our Republican Party,” wrote Virginia Republican Party Chairman Pat Mullins in a letter to members of the RNC Tuesday obtained by TIME.

As the GOP’s ruling class prepares to gather in Coronado, Calif., this week for its winter meeting, Mullins is leading the effort to unseat Agema, who has held onto his post despite calls from RNC Chairman Reince Priebus and state elected officials to step aside. After a year of controversy, Preibus as Michigan GOP Chair Bobby Schostak called for Agema’s resignation before last year’s winter meeting in Washington. “For the good of the party, we believe Dave Agema should resign,” they said. Agema has remained a thorn in their side ever since, complicating party efforts to rebrand its image and appeal to a broader swath of voters.

Two years ago, Agema posted an article on his Facebook page describe gays as “filthy,” followed up with posts backing Russian anti-homosexuality laws and questioning whether Muslim-Americans have ever contributed to American society. Just two weeks ago, Agema reposted an article from a white supremacist magazine, which he called “very interesting.”

Agema has long resisted calls to resign from a range of local and national political figures, but this week’s efforts reflect the most organized movement to force him to step aside. “Mr. Agema may be able to ignore the voice of his home state, but I am hopeful he will not be able to ignore the voice of the entire country,” Mullins said in his letter.

The RNC rules do not include a specific provision detailing procedures for the removal of members, all of whom are elected by state parties. Mullins is backing a resolution at Wednesday’s Resolutions Committee meeting calling on Agema’s resignation, that if passed, would be voted on by the full RNC on Friday.

“I would suggest that we act as one and pass a resolution making it clear that Mr. Agema’s abhorrent views and words have no place in our party—and that he in no way speaks for us,” Mullins wrote. “While he might retain his post, he has lost the respect and esteem of his colleagues. Indeed, his actions have made him a pariah. Anything short of this will allow Mr. Agema to continue disgracing our Republican Party further impugn the integrity and good standing of the RNC.”

The Democratic Party is facing a similar controversy with one of its own. Prominent Obama donor and Oregon DNC member Terry Bean remains a party leader despite facing criminal charges alleging he and his ex-boyfriend had sex with an 15-year-old boy. The Democratic Party rules, unlike the GOP’s, include specific provisions for removing members. 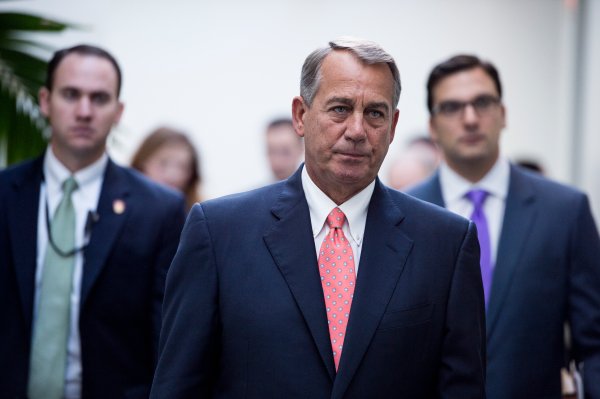 Bartender Accused in Boehner Plot
Next Up: Editor's Pick