Odds are, the college career of star Ohio State running back Ezekiel Elliott will never get better. Elliott just turned in one of the all-time great performances in title game history, in any sport, college or pro: against Oregon in Monday night’s inaugural College Football Playoff national championship, a 42-20 Buckeyes victory, Elliott ran for 246 yards and four touchdowns. He averaged an absurd 6.8 yards per carry, and ran for 14 first downs. Elliott’s stat line over his last three games reads like a video game tally: 696 yards, eight touchdowns. In the national semifinals, against Alabama, the 6’0″, 225-pound sophomore ran for 230 yards. He was the first 100-yard rusher Alabama had allowed all season.

College football, as an industry, has never had it better. The College Football Playoff is a windfall for the major conferences: ESPN is paying $7.3 billion over 12 years to broadcast the event. This season, each of the big-five conferences — the ACC, the Big 12, the Big 10, the Pac-12 and the SEC — will receive around $50 million each, almost double what they took home under the old BCS system. The Ohio State-Oregon national title game drew a 18.2 rating and averaged 33.4 million viewers, making it the highest-rated and most-watched event in cable television history. In fact, two semi-final games on New Years Day, plus the title game, account for the three most-watched cable programs ever. Thanks to the hype and momentum of the playoff, the national championship game’s ratings rose 26% compared to last year’s BCS title game between Florida State and Auburn. Total viewership spiked 31%.

Since Elliott is a sophomore, he’s ineligible for the NFL draft; only players three years removed from high school can be drafted (Elliott’s teammate, former third-string quarterback turned Buckeye State idol Cardale Jones, is a redshirt sophomore, having sat out his first year on campus, so Jones could go pro if he wants to). Basketball players can leave after their freshman year, so if Elliott played hoops, he could start making plans. But since he plays football, he has no choice but to return to campus, and risk injury in a much more violent sport.

“He has to go through another year in a very tough conference, as the national champion, so teams will be even more hyped up to go against him,” says Alan Milstein, an attorney who represented former Ohio St. running back Maurice Clarett’s ultimately unsuccessful legal attempt to overturn the NFL rule. “Hopefully, he’ll suffer no serious injury. But the reality is, his career could be over at any moment. The NFL isn’t taking the risk. Ohio State isn’t taking the risk. He’s taking all the risk.”

The risk is real. For example, after a huge freshman season in 2010, South Carolina running back Marcus Lattimore, a first-round NFL prospect, suffered season season-ending knee injuries in both his sophomore and junior years. He retired this past November, without having appeared in an NFL game. Elliott might sincerely want to return to school. He can take another year of classes, and chase a repeat championship in front of adoring crowds, on an adoring campus. A possible Heisman trophy win is tempting. But it’s blatantly unfair for Elliott, or any other player in his position, to have no option to go to the NFL. (A request to speak to Elliott, through an Ohio State spokesperson, was not returned).

MORE See the 10 Best Photos From the Ohio State vs. Oregon Championship Game

Back in 2004, Milstein argued that the three-year restriction was illegal. He still feels that way.

“The only reason a team wouldn’t draft Elliott is because they’ve all said we won’t draft him if you won’t draft him,” says Milstein. “That’s the essence of an anti-trust conspiracy.”

A federal district court agreed with him, but the U.S. Court of Appeals for the Second Circuit, based in New York, overturned that judgment, ruling that since the draft rule is a product of collective bargaining, it’s shielded from anti-trust scrutiny under federal labor laws. “That’s what unions do every day — protect people in the union from those not in the union,” appeals court Judge Sonia Sotomayor said during the arguments. “Why is this case different?”

Sotomayor wrote the opinion. “She killed me, absolutely killed me,” Milstein remembers. So much so, Milstein says, that when Sotomayor was nominated to the Supreme Court in 2009, Republicans called him up to see if he would speak out against her. Milstein, a Barack Obama supporter, refused.

The Supreme Court declined to hear Milstein’s appeal in the Clarett case. Milstein, however, sees a legal opening in another appeals court jurisdiction, most notably the Sixth Circuit (which covers Ohio) or the Eighth Circuit, located in St. Louis. Both these jurisdictions have adopted the “Mackey test” — named after former Baltimore Colts tight end John Mackey, who challenged the NFL in another case — which holds that labor restraints are only exempt from anti-trust scrutiny if they primarily affect the parties subject to collective bargaining, concern a mandatory subject of collective bargaining, i.e. (wages, hours, conditions of employment), and are subject to “bona fide arm’s-length bargaining.”

Since the draft rule is part of the collective bargaining agreement signed in 2011, it meets this third prong of Mackey. But Milstein argues (and the federal district court agreed) that since college players are prospective employees, and thus not “parties subject to collective bargaining,” — and that the three-year rule doesn’t concern wages, hours, or conditions of employment — it fails the first two prongs. It thus isn’t subject to anti-trust exemption.

Minus a legal challenge, Elliott has another option: sit out next year to limit injury risk, but stay in shape and apply for the 2016 draft. Neither of those choices, really, are all that attractive. So Elliott will almost surely return to Ohio State for another season. Fingers crossed for the MVP. 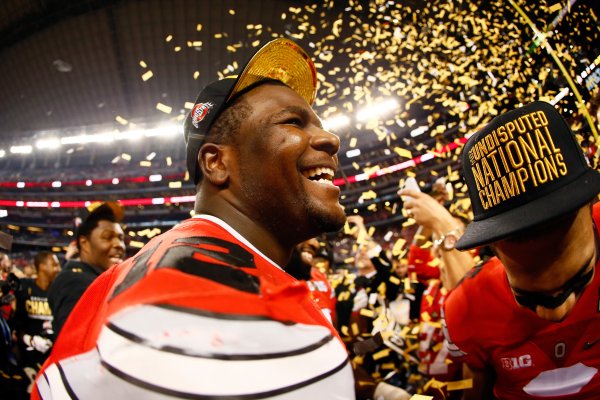