Pope Francis stands on his vehicle as devotees gather on the road to see him after he arrived at the Colombo airport Jan. 13, 2015
Dinuka Liyanawatte—Reuters

Pope Francis arrived in Sri Lanka on Tuesday, calling for the “pursuit of truth” as he began the first papal visit to the country since the end of a bitter and long-running civil conflict in 2009.

“The process of healing also needs to include the pursuit of truth, not for the sake of opening old wounds, but rather as a necessary means of promoting justice, healing and unity,” he said after landing in the capital Colombo, where he was greeted by the country’s newly installed President, Maithripala Sirisena, who displaced Mahinda Rajapaksa in national elections earlier this month.

A former Rajapaksa ally, Sirisena emerged as the unexpected winner of a ballot that, until two months ago, looked set to deliver a third term for the increasingly autocratic Rajapaksa. His defection from the former leader’s camp in November, and his promise to give more power to the legislature and weaken Rajapaksa’s executive presidency, swiftly changed the dynamics of the race, as the opposition came together behind his candidacy.

During the election, Sirisena promised an independent domestic probe into allegations of rights abuses during the civil war that saw years of bloody fighting between the country’s Sinhalese majority and separatists from Sri Lanka’s Tamil minority.

Speaking in Colombo on Tuesday, the Pontiff, who will also travel to the Philippines later this week, stressed the need for inclusive society as the country recovers from the conflict, which lasted nearly three decades.

“The great work of rebuilding must embrace improving infrastructures and meeting material needs, but also, and even more importantly, promoting human dignity, respect for human rights, and the full inclusion of each member of society,” he said. 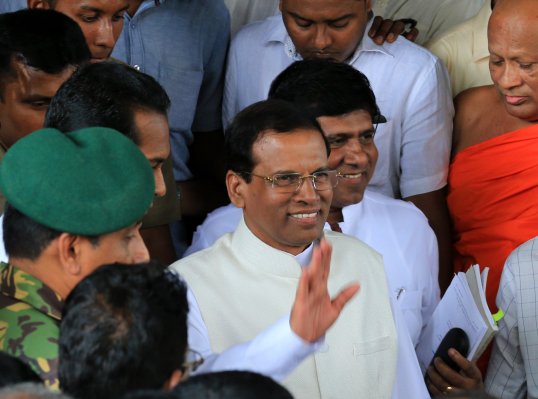