A former Miami Dolphins player said Monday that he spent 16 hours swimming to shore after falling off a boat last week.

Rob Konrad held back tears during a news conference in Plantation, Fla., as he explained his unusual nine-mile swim to safety, during which he says he encountered stinging jellyfish and a shark, CNN reports.

Konrad, 38, said he was fishing when a wave hit his boat, which was set on autopilot, and knocked him overboard. He was not wearing a flotation device and decided to swim to shore, alternating between the breast stroke and backstroke, knowing he was hours away from the onset of hypothermia.

“I quickly realized I was in a real bad situation,” he said. “I made a decision that I was going to start swimming toward shore, west.”

He was almost found a twice. Konrad said approached a fishing vessel but no one saw or heard him, and he recalled that a U.S. Coast Guard helicopter, which was searching for him, flew right over him. After hitting shore early Thursday, a security guard alerted police and he was taken to a hospital, where he was treated for hypothermia, dehydration and rhabdomyolysis.

“If you’re a good swimmer and you’re faced with an emergency, you could be capable of doing what he did,” said Sid Cassidy, an accomplished distance swimmer who has trained in the area where Konrad swam. 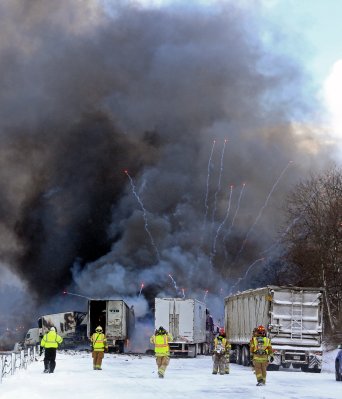 1 Killed and 10 Injured in Massive Michigan Pileup
Next Up: Editor's Pick