Meghan Trainor Is All About the Boys on Title, With Mixed Results

For as much noise as there’s been around singer Meghan Trainor since her single “All About That Bass” went to number one on the charts last fall, it’s somewhat surprising that she’s only now releasing her debut album. Title, which hits shelves today, provides new material for Trainor’s growing fan club. (She calls them “Megatrons.”) It also provides a logical culmination of the ideas in the troubling “All About That Bass.” The album gives no meaningful idea of who Trainor herself is — outside of the context of her relationships with men.

“Bass” exemplified this problem: It was ostensibly an empowerment anthem for girls (“bass” refers, basically, to the lower half of the human body), with a message that more voluptuous bodies were more attractive to men, and therefore better. Don’t love yourself because of your own inherent worth; be happy that “boys like a little more booty to hold at night.” The song’s weird snipes at “skinny bitches” and those who look like a “silicone Barbie doll” seemed neurotic and angry; these women were undeserving of male attention. “So if that’s what you’re into,” Trainor sang, referring to thin women, “then go ahead and move along.” The song wasn’t even directed at women. It was meant for potential male suitors, whom Trainor fixates on at length.

If Trainor doesn’t want the career of a hybrid singer/positivity activist, she doesn’t need to do it; no one is alleging that “All About That Bass” is uplifting more loudly than is Trainor herself. (To my ear, it’s downright mean.) The attempts, throughout Title, to merge Trainor’s musical style with a sort of Upworthy-ready sunniness and optimism fall uncomfortably flat. Just about every time Trainor says anything positive about herself, she’s looking at herself through men’s eyes. In the song “Title,” Trainor says she deserves to be treated “like a trophy, put me on the shelf.” “Dear Future Husband” instructs the listener, “Open doors for me and you might get some kisses” and asks him to “tell me I’m beautiful each and every night.” In “Lips Are Movin,” the album’s second single, Trainor once again addresses a man, this time going on at length about how lucky he would be to have her.

But are we, as listeners, so lucky we now have Trainor? As music, the album is gloppy and saccharine, with Trainor’s voice sounding digitally sweetened to the point of near-incomprehensibility. And thematically, the songs that evince an attitude of goodness, including that ballad (“Close Your Eyes”), are smarmily obsessed with male approval; the ones that show off Trainor’s “bad” side are like a preteen’s idea of rebellion. Trainor sings about a “Walkashame,” but you sense she’s never actually been on one. Either way, a pop star more committed to the rebellion Trainor halfheartedly stabs at wouldn’t sing the lyric “My daddy knows I’m a good girl” to defuse her more adult side, or act as though using a curse word in a song is wildly scandalous. It’s obvious there’s little rebellion in Trainor, which is fine, but the mores she’s clinging to were tired years ago.

Trainor, clearly, has growing up to do, as a songwriter and a vocalist. It’s fine that Meghan Trainor wants love and affection — most people do — but the third or fourth song about how she is too beautiful to be ignored by a man might have been enough. That Title comes out at a time when female pop stars from Taylor Swift to Rihanna are cannily subverting their public images and acting as paragons of independence is particularly frustrating. Pop music can be as refreshing, and as unconcerned with male approval, as “Blank Space,” in which Swift paints herself as a man-eater, or any of the songs in which Rihanna’s walk has no shame to it at all. Those songs, and others by the likes of Lorde and Ariana Grande, are adventurous, unafraid to be both sonically peculiar and aggressively independent. It was a widely remarked-upon fact that there were no men in the top five songs on Billboard‘s Hot 100 for a stretch last year; Justin and Bruno aside, there are no solo male acts that present a real threat to Trainor’s chart dominance. So why is she so hung up on guys?

Perhaps it’s that Trainor styles herself a throwback. Though there are hip-hop elements to “Bass,” it has the sound of a doo-wop song that would be played at a soda shop. Her music is small-c conservative; in its sound and its message, it walks back the most provocative, and most interesting, aspects of contemporary pop music. Trainor may be proud not to have any treble, but she ought to make a bit more trouble. 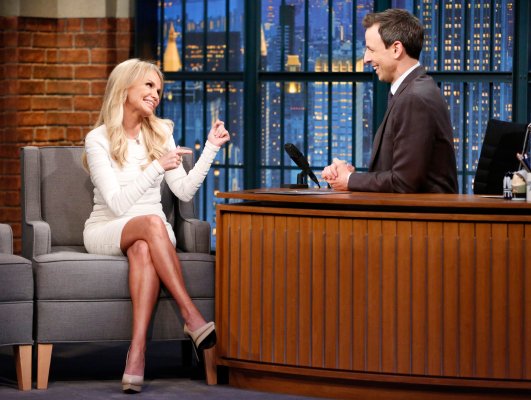 Kristin Chenoweth Says Her Dad Made Her Afraid Of Flying
Next Up: Editor's Pick