The State of the Union is sort of like a long work meeting. Because it’s so tedious, even the lamest joke will get a hearty laugh.

That’s not to say that President Obama can’t be funny. Like most recent presidents, he’s gotten genuine laughs poking fun at himself and others at the annual White House Correspondents Association dinner and the Gridiron Club.

But those are actual jokes. The lines from the State of the Union that get laughs are something else entirely — those kind of “work hard … hardly working” things that Michael Scott would get uncomfortable groans for on “The Office.”

Here’s a guide to the seven types of Obama jokes you’ll hear Tuesday, in order of least to (al)most funny.

There is no lower form of humor than the pun, but for some reason Obama has seen fit to include it in the most serious annual speech he gives.

Example: “In the year since I asked this Congress to raise the minimum wage, five states have passed laws to raise theirs. Many businesses have done it on their own. Nick Chute is here today with his boss, John Soranno. John’s an owner of Punch Pizza in Minneapolis, and Nick helps make the dough. [Laughter] Only now he makes more of it. [Laughter]” — 2014

Was it funny? No. This isn’t even a dad joke. It’s a grandpa joke.

While not a pun per se, this is a joke that depends on some lame play on words that would get you kicked out of a junior high cafeteria.

Example: “We got rid of one rule from 40 years ago that could have forced some dairy farmers to spend $10,000 a year proving that they could contain a spill, because milk was somehow classified as an oil. With a rule like that, I guess it was worth crying over spilled milk. [Laughter]” — 2012

Was it funny? No. This joke is so bad it makes us feel like sending a condolence card to Sasha and Malia for enduring their father’s sense of humor.

There’s nothing wrong with a well-placed reference to pop culture. Comedians use it to great effect all the time. But there are times when it’s just lazy.

Example: “Women deserve equal pay for equal work. She deserves to have a baby without sacrificing her job. A mother deserves a day off to care for a sick child or a sick parent without running into hardship. And you know what, a father does too. It is time to do away with workplace policies that belong in a ‘Mad Men’ episode.” [Laughter]” — 2014

Was it funny? No. Although, in Obama’s defense, it’s not even clear this was supposed to be funny.

Obama is on surer footing when he makes jokes that shows he is self-aware, especially given the intensely partisan audience at the State of the Union.

Example: “And if you want to know the real impact this law is having, just talk to Governor Steve Beshear of Kentucky, who’s here tonight. Now, Kentucky is not the most liberal part of the country. That’s not where I got my highest vote totals. [Laughter]” — 2014

Was it funny? Sort of. This is more “snort gently through your nose” funny than “laugh out loud” funny, but it’s approaching actual humor.

Obama can be a little sarcastic at times, but when he wields that weapon gently, he can score a good point off his political opponents.

Example: “So again, if you have specific plans to cut costs, cover more people, increase choice, tell America what you’d do differently. Let’s see if the numbers add up. But let’s not have another 40-something votes to repeal a law that’s already helping millions of Americans like Amanda. The first 40 were plenty. [Laughter]” — 2014

Was it funny? Sure. It wasn’t the only time that Obama’s gotten a joke out of Republican opposition to the Affordable Care Act, either.

The State of the Union is heavily scripted, but there are still moments when Obama breaks away, usually in response to the audience’s reaction — the way a late-night talk show host might milk a moment.

Example: “We cut taxes for 8 million Americans paying for college. [Applause] I thought I’d get some applause on that one. [Laughter]” — 2010

Was it funny? Sure. This is one of those moments that’s more about the delivery than the line itself, but we’re grading on a curve here.

There’s never going to be a truly subversive joke in the State of the Union. But there are lines that can come close to something you might find in the “Life in These United States” column in Reader’s Digest.

Example: “Within 25 years, our goal is to give 80 percent of Americans access to high-speed rail. This could allow you to go places in half the time it takes to travel by car. For some trips, it will be faster than flying, without the pat-down. [Laughter]” — 2011

Was it funny? Yes. Everyone can relate to the hassles of going through airport security and the joke is unexpected enough to be funny. More jokes like this, please. 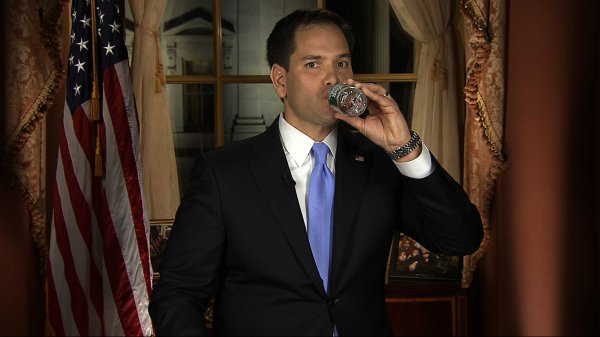 The Curse of the State of the Union Rebuttal
Next Up: Editor's Pick