Sen. Ted Cruz: 'Our President Should Have Been There'

On Sunday, leaders representing Europe, Israel, Africa, Russia, and the Middle East linked arms and marched together down Place de la Concorde in Paris. But, sadly, no one from the White House was found among the more than 40 Presidents and Prime Ministers who walked the streets with hundreds of thousands of French citizens demonstrating their solidarity against radical Islamic terrorists.

The absence is symbolic of the lack of American leadership on the world stage, and it is dangerous. The attack on Paris, just like previous assaults on Israel and other allies, is an attack on our shared values. And, we are stronger when we stand together, as French President François Hollande said, for “liberty, equality, and fraternity.”

Radical Islamic terrorists are targeting all of those who do not share their radical ideology, escalating their attacks in shocking ways.

In the last year alone, the world has become a much more dangerous place for Westerners, as terrorists have deliberately aimed their campaign of murder against those, most notably innocent civilians, who represent a free and open society.

We witnessed American, British, and Israeli aid workers and journalists savagely beheaded by ISIS in Syria.

We saw a sympathizing radical attack the Canadian parliament.

We saw Hamas terrorists butchering Israeli-American rabbis in their Jerusalem synagogue while they went about their morning prayers.

We saw New York policemen attacked by an axe-wielding terrorist.

We saw commuters in Sydney held captive for hours in a coffee shop by yet another radical Islamist.

And, now we have all watched, horrified, as a pair of al Qaeda terrorists attacked a satirical newspaper in Paris and executed 10 members of its staff and two of the policemen who came to their defense.

That same day, one of their co-conspirators shot a police woman and a jogger, then the next day attacked a kosher grocery store to terrorize Jewish patrons preparing for what they had hoped would be a peaceful Shabbat. By the time the siege was over, four more innocents were dead.

Aid workers, members of the media, government, cafés, law enforcement, Christians, Jews, and even other Muslims—these are the targets of radical Islamists. They want to destroy civil society.

Their grievances are not against any particular government or policy; they are offended by the very notion of a free society where individuals have the right to worship, vote, and express themselves as they please—rights that are defended by security forces whose job is not to persecute or coerce citizens, but to protect them.

Our freedoms are anathema to the radical Islamists, and they are willing to sacrifice their very lives to attack us with anything from meat cleavers to Kalashnikovs—anything to terrorize us into submitting to their brutal, totalitarian, warped version of Islam.

Our choice now is either to confront this intolerable threat to our liberty, or to continue to respond to the attacks as if they are isolated incidents that we might be able to prevent if we would only stop somehow “provoking” them.

If events in Paris teach us anything, it is the utter failure of the latter approach. It has not made things better. It has made them worse.

It is not Israel’s fault, or the fault of the Jews of Paris or Jerusalem.

It is not the fault of journalists or aid workers trying to document or lend assistance to the cruel civil war in Syria. It is not the NYPD’s fault.

It is not Charlie Hebdo’s fault.

It is not the fault of the commuters of Sydney, nor the freely elected government of Canada, any more than it was the fault of the runners in the Boston Marathon or the soldiers of Fort Hood in my home state of Texas—or for that matter of the 3,000 people who died on that sunny September day in 2001.

It is not the fault of America.

The scourge of radical Islamic terrorism is the exclusive fault of those who launch the attacks.

We must, as Americans, demand that our nation summon the will to stand up and lead the effort.

Recently, the President of Egypt, Abdel Fattah al-Sisi, a Muslim, gave a remarkable speech at Al-Azhar University in Cairo in which he challenged peaceful Muslims to confront what is happening to their religion—to stand up those who would twist faith into a mandate to murder.

This is where we can find our strength—by coordinating closely with our allies who are fighting this common threat. We can reject attempts to draw a moral equivalence between our friends and those who support or condone the terrorists. Instead, we should condemn and shun state sponsors of terrorism. We should encourage Muslim nations like Egypt and Saudi Arabia to join us and aspire to freedom in their own societies.

And, we should make it clear to the radical Islamic terrorists that the United States is not going to simply “move on” from Paris in the hopes that they will leave us alone, but rather that we are going to call them out by name as we stand strong and lead the fight against them.

Many of our allies gathered together in Paris yesterday in an admirable display of determination. Our President should have been there, because we must never hesitate to stand with our allies. We should never hesitate to speak the truth. In Paris or anywhere else in the world.

Cruz is the junior U.S. Senator for Texas. 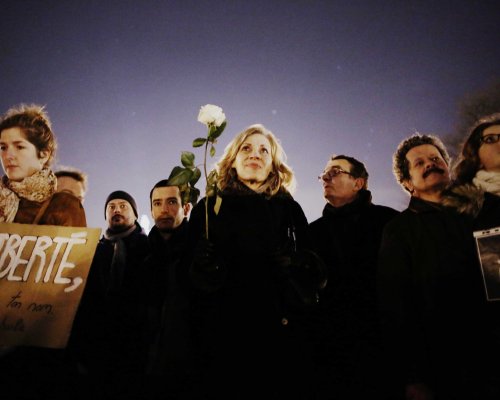