Great Storytelling Was the Real Winner at the Golden Globes

In the early 1980s young Richard Linklater moved from Houston, his home town, to the state capital, where he founded the Austin Film Society as a hub for classic movies. One day a student from UT Austin, also a Houston native, walked into the Society’s theater and asked how he could help. “Grab a broom,” Linklater said. And that’s how he helped launch Wes Anderson’s career in movie love.

More than 30 years later, the two cinephiles swept the 72nd Golden Globe awards. The Hollywood Foreign Press Association chose Linklater’s Boyhood as Best Motion Picture Drama and Anderson’s The Grand Budapest Hotel as Best Motion Picture Comedy or Musical. The first prize was widely expected; Boyhood has won more than half of all the year-end critics groups’ citations for Best Film. But the second was a lovely upset over that category’s favorite, Birdman, which settled for two other awards: Best Comedy and Musical Actor for Michael Keaton and Best Screenplay for the quartet of writers headed by director Alejandro G. Iñárritu.

Amy Adams was named Best Comedy or Musical Actress as the subjugated painter Margaret Keane in Big Eyes, and Julianne Moore Best Dramatic Actress as a professor suffering from early-onset-Alzheimer’s disease in Still Alice. Eddie Redmayne, who played Stephen Hawking in The Theory of Everything, took Best Dramatic Actor. Boyhood‘s Patricia Arquette and J.K. Simmons of Whiplash won their utterly expected Supporting Globes, while Linklater shocked no one by being chosen Best Director. (All the winners are here.)

The Academy Awards, which air on Feb, 22, don’t have separate prizes for comedies and dramas — no matter how far the definition of comedy has to be stretched to include movies about a suicidal actor (Birdman), an abused artist (Big Eyes) and a hotel overrun in turn by Nazis and Stalinists (Budapest). All the Globe laureates in the acting and Picture categories will have six weeks to slug it out for single statuettes. Winner take all, losers be damned.

But last night, the movie globe revolved on a Houston-Austin axis that encompassed two very different and splendid achievements (and this critics’ top two movies of the past year). Boyhood: a romantic-realistic movie, shot in 12 consecutive summers, that traced a boy’s life from first grade to college freshman. Budapest: a lush, crackpot reimagining of European history made by a filmmaker whose taste is so fanciful that, as the show’s co-host Amy Poehler said of Anderson, he came to the Globe ceremony “on a bicycle made of antique tuba parts.”

Aside from Anderson’s triumph, viewers had to dig for real surprises — unless they had looked at the Goldenglobes.com web site Fri. and seen a brief posting that announced Selma and Into the Woods as the Drama and Comedy-Musical winners. (Just a little Obamacare-style glitch, folks.) How to Train Your Dragon 2 upset The LEGO Movie as Best Animated Feature — ouch, says one abashed prognosticator — and the Russian drama Leviathan caused a mild jolt in its Best Foreign Film win over the Polish Holocaust film Ida.

More seismic shifts occurred in the TV awards, where The Affair trumped Orange Is the New Black, and Fargo took the Miniseries award over True Detective and Olive Kitteridge. But that’s James Poniewozik territory — and besides, do movie people care about television? The HFPA placed the TV people so far in the rear of the Beverly Hilton ballroom that the winners seemed to have been bussed in from Santa Monica. The big suspense was whether they’d be too exhausted by their 10k jog to the stage to give their acceptance speeches.

In a three-hour ceremony amiably presided over by Poehler and Tina Fey, the glamour center was George Clooney (wearing his wedding tuxedo) as he graciously accepted the Cecil B. De Mille award and gave voice to the evening’s abiding non-entertainment concern with world threats to journalists and hacked film companies.

Whatever jokes can be made about the qualifications of the HFPA members as film arbiters, and we’ve made a lot of them, you have to admit these foreign journalists have a memory. Big year-end awards typically go to films released in the last quarter of the calendar year: 12 Years a Slave and American Hustle were the Globe winners in 2014, Argo and Les Misérables in 2013. But Boyhood received its world premiere at Sundance last Jan. 17, and The Grand Budapest Hotel at the Berlin Film Festival on Feb. 6.

These movies have been around for a while. They stuck in movie watchers’ minds and couldn’t be dislodged by late arrivals of the inspirational biopic genre: The Imitation Game, The Theory of Everything and Selma. Linklater and Anderson — Iñárritu too — followed the oldest, most creative movie tradition: they made up stories and made people believe in them. That’s reason enough to applaud them — and, for a change, the Hollywood Foreign Press Association. 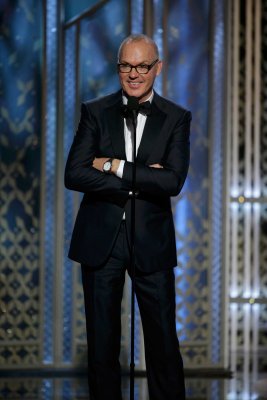 What the 2015 Golden Globes Mean for This Year's Oscar Race
Next Up: Editor's Pick