Jennifer Aniston made one thing clear on the Golden Globes red carpet Sunday: She is not letting the pressure of attending the awards show as a nominee get her down.

“It’s been a pretty zen year – and thankfully,” Aniston, 45, told Carson Daly on NBC’s pre-show. “Who wants to be crazy and stressed out on a day like today? I feel like a kid!”

Aniston, a best actress nominees for her role in Cake, showed off her playful side a few minutes later when she jokingly grabbed Kate Hudson‘s rear end as she approached Ryan Seacrest for an E! interview, just as he was wrapping up his chat with Hudson.

“Look at this,” she said with a grin as she showed Hudson’s assets to the world. 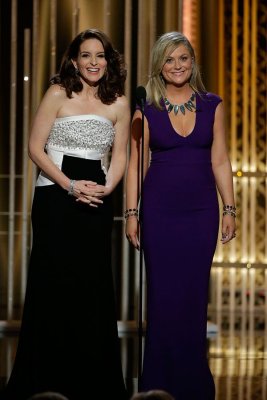 Watch the Best Jokes and Zingers From Tina and Amy's Third Golden Globes Monologue
Next Up: Editor's Pick