Actress Keira Knightley won big before Sunday’s Golden Globes even began when she stepped out on the red carpet at the Beverly Hilton in Los Angeles.

Wearing a Chanel gown, the mom-to-be told E!‘s Ryan Seacrest that her bibbed gown was a group effort.

“Apparently it took 30 people to make this in a week so I have to give a huge thank you to all 30 people,” she said.

“It makes me really frightened — what if I spill something? It’s going to make me feel incredibly guilty so hopefully I won’t!”

Knightley, 29 — who is expecting her first child with her husband, musician James Righton — is nominated for best supporting actress for her role in The Imitation Game, which is up for a total of five awards, including best motion picture.

Before the big event, Knightley stepped out for the American Film Institute Awards on Friday and the BAFTA tea party on Saturday, where she also kept her bump mostly under wraps. 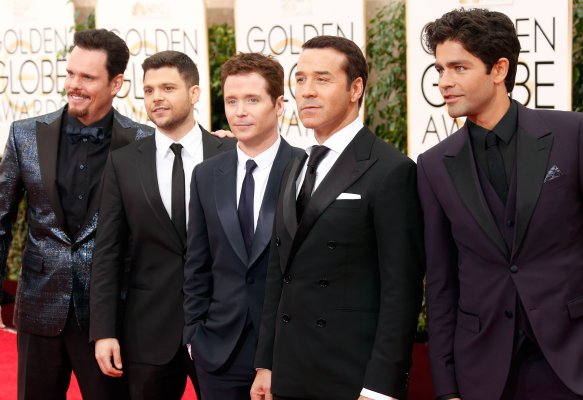