Last week’s chaotic violence in Paris reached a spectacular climax on Friday afternoon, when a lone gunman stormed through the doors of a kosher supermarket, Kalashnikov blazing, and took its customers siege. Four hostages died in the terrifying four-hour ordeal. Amedy Coulibaly’s assault in Paris’s easternmost neighborhood appeared to erupt out of nowhere after days dominated by the Charlie Hebdo massacre; it jangled already frayed French nerves and pushed security forces close to a breaking point.

The attack has been an intense shock to France’s 600,000 Jews. On Friday night, the city’s ornate Grand Synagogue in the traditional Jewish district of the Marais cancelled its Sabbath services for the first time in 70 years, when the neighborhood was under Nazi occupation.

And yet, despite the deep shock, French Jews say the very fact that there was a deadly assault on a kosher supermarket comes as little surprise.

For months, indeed years now, French Jewish leaders have been warning government officials, journalists and each other that they sense a creeping anti-Semitism in the country, and that they increasingly feel a strong unease about their own security. About 7,000 French Jews left the country during 2014, according to the Jewish Agency for Israel, with many emigrating to Israel; that number is double the figure from 2013.

Some community leaders say hate speech against Jews has exploded in recent times, defanged of its stigma, thanks in part to figures like the hugely popular French-Cameroonian actor Dieudonné (recently profiled in TIME), whose one-man shows feature jokes about the Holocaust and play to packed audiences in Paris. And while statistics are difficult to confirm, Jewish organizations report rocketing numbers of anti-Semitic aggression, such as people desecrating Jewish gravestones and scrawling anti-Jewish graffiti. Last June, a small group of Muslims attacked Jewish stores and a synagogue in a Paris suburb. Sooner or later, many Jewish leaders have warned, there would be a truly violent attack.

That violent attack has now occurred. And as Jews absorb the tragedy, many say they believe the killings prove that their fears have been well-grounded, rather than exaggerated nervousness, as some French have believed. “There is a feeling of anger, and yet in a way this was expected,” Sasha Reingewirtz, president of the Union of French Jewish Students, told TIME on Sunday. He said he and others now hope that Friday’s attack will force a reckoning among non-French Jews about how to tackle anti-Semitism—and perhaps push French Muslim leaders to become far more vocal on the issue. “It is going to take years, but I really believe this week is a moment of change.”

The first such signs of change might have come on Sunday, when hundreds of people arrived at the mammoth solidarity march carrying hand-written signs saying, “Je suis Juif,” or “I am Jewish”—a symbolic show of empathy after the killings, even among those who were not in fact Jewish. Such overt support, Jewish leaders say, feels somewhat new. “I’m very hopeful,” said Rabbi Tom Cohen, an American immigrant in Paris. “I think all these events will lead the French to think about things.”

There are still deep anxieties among French Jews, however. On Sunday, the traditional shopping day in the Marais, Jewish store-owners said they had at first hesitated to open their doors. Once they did so, they were planning to beef up security.

Louise Magnichever, who for 35 years has owned the neighborhood’s Librairie du Temple, a Judaica bookstore, said she and her son Zeev would install metal shutters that could drop quickly in the event of an attack. Zeev was also considering buying a gun to keep inside the store, she admitted, “but against a Kalashnikov what good is it going to do?”

Indeed, despite the kumbaya feeling of Sunday’s march—where Israeli Prime Minister Benjamin Netanyahu walked among numerous heads of state, just a few yards from Palestinian President Mahmud Abbas—Jewish leaders fear that little will be done to tackle anti-Semitism once the turmoil of this past week subsides. Muslim leaders equally complain of being stereotyped and, just like French Jews, sense a rising level of violence against them. Several mosques have suffered attacks since last Wednesday’s massacre at the Charlie Hebdo office.

For now, both sides appear keen to work together against terror threats. On Saturday evening, several Islamic clerics joined a memorial service outside the site of Friday’s hostage siege at the kosher supermarket, and others attended a ceremony with Netanyahu at the Grand Synagogue on Sunday. Whether all that leads to change is yet unclear, however. “I hope this is a wake-up call,” said local real-estate agent Franck Cohen, 46, while standing on a sidewalk in the Marais on Sunday as thousands of people passed by in the unity march. “I hope this is the time they finally do something, rather than offer more words and empty assurances.”

—With reporting by Jay Newton-Small / Paris

Correction: The original version of this article incorrectly stated that Zeev Magnichever was the husband of Louise Magnichever. He is her son. 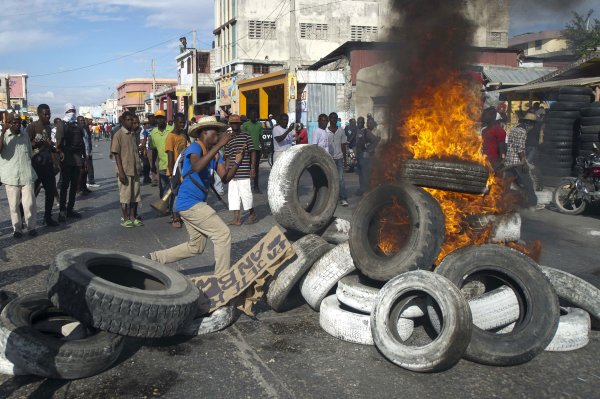 What Does Haiti Have to Show for $13 Billion in Aid?
Next Up: Editor's Pick