Esther Bekerman, 19, left, a cousin of one of the hostages, and Eliahou Rouas Cohen, 19, right, light a candle at a makeshift memorial near a kosher grocery store where four hostages were killed in Paris, Jan. 10, 2015.
Francois Mori—AP
By Charlotte Alter

A Muslim employee of the Paris kosher grocery store attacked by a terrorist Friday is being hailed as a hero for saving multiple customers from the gunman.

When Amedy Coulibaly opened fire in the Hyper Cacher grocery store, employee Lassana Bathily reportedly ushered several customers into a freezer to save them from the attack. “I went down to the freezer, I opened the door, there were several people who went in with me. I turned off the light and the freezer,” Bathily, 24, told French network BFMTV, according to the Huffington Post‘s translation. “I brought them inside and I told them to stay calm here, I’m going to go out. When they got out, they thanked me.”

Multiple people survived the attack, which French President Francois Hollande called “an anti-Semitic act,” by hiding inside the freezer.

Some survivors were reportedly able to call their friends and relatives from the freezer in order to tell them they were alive. It is not yet clear how many people Bathily saved, since many traumatized survivors have not yet come forward with their version of events.

When police raided the store and killed Coulibaly, they originally thought Bathily was a co-conspirator, he says. “They told me, get down on the ground, hands over your head,” he told BFMTV. “They cuffed me and held me for an hour and a half as if I was with them.”

Bathily was hailed as a hero on social media at a time of especially high tensions between Muslim and non-Muslim communities in France, in the wake of al-Qaeda-claimed terror attacks Wednesday against satirical newspaper Charlie Hebdo and Friday against the kosher grocery store. 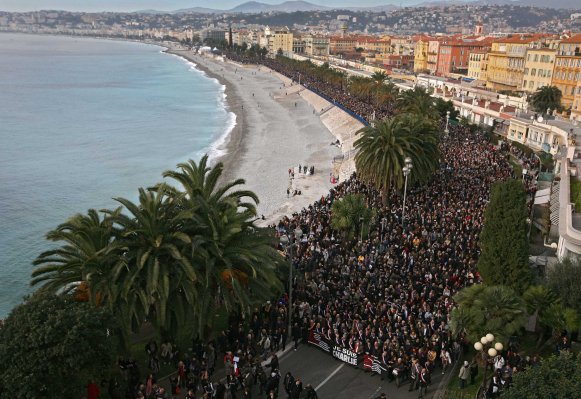 Hundreds of Thousands March for Victims in France
Next Up: Editor's Pick