The Houston Rockets defeated the New York Knicks 120-96 at Madison Square Garden on January 8, 2015 in New York City.
Elsa—2015 Getty Images
Ideas
By David Berri
David Berri is a professor of economics at Southern Utah University. He is the lead author of The Wages of Wins and Stumbling on Wins and continues to serve on the editorial board of both Journal of Sports Economics and the International Journal of Sport Finance.

After such a dreadful start, the Knicks on Monday apparently surrendered. Gone in trade are Iman Shumpert (the team’s starting shooting guard) and J.R. Smith (a key reserve). In addition, Samuel Dalembert – a player who started 21 times at center — has been waived. In return, the Knicks have acquired three players on non-guaranteed contracts. Perhaps more importantly, the team has acquired even more salary cap space. Such space will be used next summer in yet another rebuilding effort.

For Knicks fans, the rebuilding scenario isn’t new. Since 1973 — the last time the Knicks won an NBA title — this team has been trying to build another champion. And all these efforts remind us of this standard history lesson: Those who do not learn history are doomed to repeat it.

What can’t the franchise seem to learn from its own history? When the Knicks spend large sums of money on players, they tend to lose.

Prior to the aforementioned trade, the Knicks ranked third in the NBA in payroll. Since 1987-88 (we have payroll data for every season from 1987-88 to 2013-14) the Knicks have ranked in the top three in spending 17 times. What did all that spending achieve? Mostly losing. In 12 of these 17 years, the Knicks won fewer than half their games. And only once during those 17 years did this team win more than 60% of their contests. On average — across these 17 seasons of spending — the Knicks had a winning percentage of only 0.449.

What about the nine seasons where the Knicks did not rank in the top three in team payroll? In these seasons, the Knicks finished with a winning record every single time. And seven of those times, the Knicks won more than 60% of their games.

So the lesson from history is simple: quit trying to buy a championship.

Of course, one has to ask: Why doesn’t spending more money lead to more wins for the Knicks? If we look at the entire NBA, we actually see a weak positive correlation between spending and wins. Specifically, about 11% of the variation in winning percentage is explained by team spending. Or, to put it another way, about 89% of the variation in winning percentage in the NBA is NOT explained by team spending. So contrary to what we see with the Knicks, more spending doesn’t necessarily hurt. But it also doesn’t help much.

To understand why more money doesn’t lead to many more wins, we need to understand how players are evaluated in the NBA. As I noted last October, published studies have shown that scoring totals are the primary performance statistic determining free agent salaries, post-season awards, and the allocation of minutes. Scoring totals, though, can be manipulated. The more a player shoots, the more a player will score. And that is true, even if the player is not truly amazing with respect to shooting efficiency.

Hence the problem. Shooting efficiency — along with factors like rebounds and turnovers — are the primary determinants of wins in the NBA. So if a team hires a collection of scorers who do not shoot efficiently — and can’t do much else to help the team win — then that team will not win very often.

Two teams in New York history highlight the role scorers — and the lack of scorers — play in the fortunes of a team. The 1992-93 edition was the last team to win 60 games in New York. This team did employ Patrick Ewing, an All-Star who could score. But it was led in the production of wins by Charles Oakley and Anthony Mason. And the team also received substantial contributions from Doc Rivers and Greg Anthony. Although these four players produced wins, they didn’t score much. And this team led by non-scorers ranked 22nd in league payroll.

The 1992-93 team is essentially the opposite of the 2005-06 edition. This team ranked first in payroll. In fact, the Knicks spent more than $125 million on players that season. This remains the most any team has ever spent directly on player salaries (this does not count luxury tax payments). But all that spending led to only 23 wins.

The 2005-06 Knicks had a host of players who were above average scorers. The list included Stephon Marbury, Jamal Crawford, Eddy Curry, Channing Frye, Jalen Rose, and Nate Robinson (among others). But all these scorers didn’t produce many wins.

The architect of the 2005-06 fiasco was Isiah Thomas. After the 2008 season, Thomas departed the Knicks and once again the team was rebuilt. By 2012-13, the Knicks appeared to be competitive. That season, the Knicks won 54 games. And just as we saw 20 years earlier, the 2012-13 Knicks were led in the production of wins by two non-scorers. Jason Kidd and Tyson Chandler — two players not known for scoring many points — combined to produce nearly 24 wins with this team.

But after the 2012-13 season, Kidd retired. And Chandler missed 27 games the next season, before being traded to the Dallas Mavericks in 2014. For the Knicks to keep winning, the production of Kidd and Chandler had to be replaced. But the moves the Knicks made were not consistent with that objective.

The primary player the Knicks added after the 2012-13 season was Andrea Bargnani. In 2006, Bargnani was the number one pick in the NBA draft. In 2010-11, Bargnani avaraged 21.4 points per game. And for his career he has average 15.0 points per contest.

All this scoring has resulted in career earnings that will exceed $70 million after this season. But because Bargnani can’t shoot efficiently or rebound, he can’t produce wins. For his career, his production of wins have always been in the negative range. In other words, the team is generally better off if he doesn’t play.

Despite this production, Bargnani ranks among the top three in salary on the current Knicks. The other two members of this trio are Amare Stoudemire and Carmelo Anthony. Both Stoudemire and Anthony have been elite scoreres in the NBA. But neither player has produced many wins for the Knicks.

Unlike Stoudemire, Anthony has generally been healthy. But as I detailed last May, Anthony is very much overrated. Yes, he scores many points. This, though, is because he takes many shots. His career shooting efficiency isn’t much different from average. And since he doesn’t do much else to help a team, Anthony’s production of wins in his career tends to also be close to average.

Again, the Knicks needed to replace the production of two non-scorers from the 2012-13 season. But just as they have done in the past, they chose to return to the top ranks in NBA payroll by investing in scorers. And just as we have seen in the past, this strategy did not pay off.

But after this season, the team can once again rebuild. The team has cap space in abundance, so a new collection of players will be brought to New York. If this cap space is devoted to a new set of scorers, we probably can expect history to repeat for the Knicks. But perhaps the Knicks will spend just a bit less and be focused a bit more on players who produce wins. If that happens, maybe competitive basketball can again return to New York.

David Berri is a professor of economics at Southern Utah University. He is the lead author of The Wages of Wins and Stumbling on Wins and continues to serve on the editorial board of bothJournal of Sports Economics and theInternational Journal of Sport Finance. 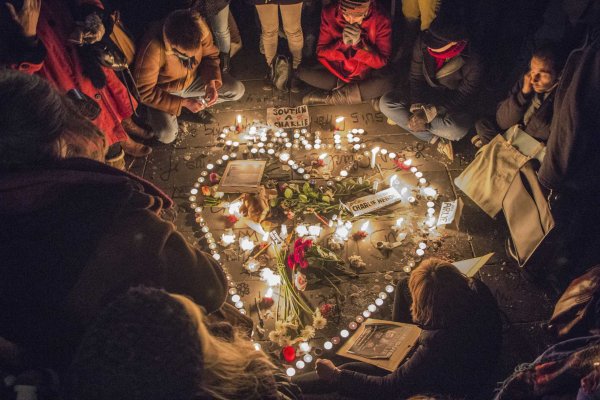 Paris Terrorist Attacks Aren't About Religion
Next Up: Editor's Pick