The Promise of Universal Community College

Virtually all Americans enroll in high school these days and have the opportunity to attend public schools for free, but a century ago, that was not the case. In 1910, fewer than one in five Americans attended high school; by the start of World War II, three-quarters of high-school aged Americans were enrolled. The result is clear: decades of innovation, economic growth, and social mobility driven by a smarter, more skilled American population.

The timing of President Obama’s proposal today to extend this idea to the first two years of college could not be better. Partnering with states, the federal government would make community college free for many students, promising to dramatically expand the number of Americans who attain post-secondary skills.

The demand for post-secondary education is today greater than at any time in U.S. history and is projected to increase dramatically in the coming years. Within the next decade, 60 percent of jobs will require post-secondary education; meanwhile, just over 40 percent of Americans today have a college degree. Without significantly higher college graduation rates, the U.S. will face a shortage of millions of college-educated workers by 2025.

Meanwhile, the face of America is rapidly changing. In the year 2000, for example, twelve percent of American high school graduates were Hispanic. By 2020, Hispanics will make up 25 percent of high school graduates. Because these and other students of color have historically been underserved by higher education— with lower enrollment and graduation rates — they miss out on the economic opportunity higher education offers. A program like this could begin to reverse that trend.

Our nation’s future depends on our higher education system delivering many more degrees of higher quality at a lower per-pupil cost to a more diverse population. But the recent pace of change is too slow. Since his first year in office, President Obama has been calling on colleges to hold down costs and drive up graduation rates. While slightly more students are graduating now than in the president’s first year in office, the pace of change has been nowhere near fast enough to meet projected economic demand.

The president’s proposal offers a chance for our nation to reset the dynamic of who goes to college. Too often, the answer has been: Whoever could navigate the application process and afford tuition. The possibility for tomorrow: Anyone willing to make the commitment.

Of course, getting students into community college and reducing the cost is only half the battle. Community colleges today enroll seven million students, more than 40 percent of all undergraduates in the U.S. Unfortunately, fewer than half of all community college students graduate. And, while many community college degrees and certificates help students land jobs with strong wages — from nursing to welding to information technology — others result in jobs that pay wages barely higher than those earned by high school graduates.

In urban areas, the projected growth in demand among employers for workers with a bachelor’s degree is significant, and most jobs with higher wages require at least that level of education. Yet, while 80 percent of students entering community college intend to earn a bachelor’s degree, only 15 percent do so within six years.

The president’s proposal acknowledges the need for better outcomes by tying the “free tuition” funds given to states to performance standards for schools and students. The devil of course will be in the details. Community colleges must not only enroll but must graduate more students. Four-year colleges must accept more transfers, count all their credits towards majors and degrees, and graduate many more with a bachelor’s degree. And everyone responsible for higher education — policymakers, community colleges and universities alike — must work to ensure that more college students benefit from their higher education, which includes landing (and keeping) a job with family-sustaining wages.

President Obama’s initiative represents an immense investment in the future of the nation. But as with all investments, those responsible for its returns should ensure that the unprecedented access it offers is not hollow — that the nine million students who could receive community college tuition actually learn, graduate, and attain the jobs and further education to which they aspire.

We know it can be done. There are community colleges in our country, like South Dakota’s Lake Area Technical Institute, with graduation rates above 75 percent. Santa Fe College in Gainesville, Florida, sends more than half of its students to four-year universities, and nearly two-thirds of those students go on to earn a bachelor’s degree. Graduates from Washington State’s Walla Walla Community College earn an average annual salary of $42,000 immediately after graduating, growing to $57,000 five years later.

Combine results from quality institutions like these with the elimination of community college tuition and our nation can unleash a new era of innovation and economic growth. Like universal high school did. Just imagine.

Joshua Wyner is founder and Executive Director of the Aspen Institute’s College Excellence Program and author of the 2014 Harvard Education Press book, What Excellent Community Colleges Do: Preparing All Students for Success.. This article also appears in the Aspen Journal of ideas. 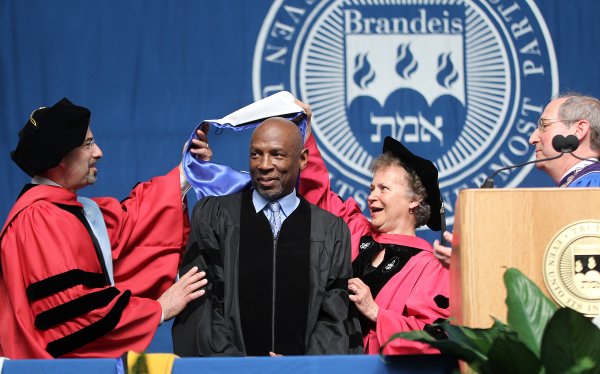