How MLK Day Became a Holiday

Celebrating Martin Luther King Jr. Day is no long-standing tradition, and its establishment was no sure thing. Here’s how the occasion became as central to January in America as New Year’s resolutions.

Beginning almost immediately after King’s assassination, members of Congress proposed that his birthday ought to be a national holiday, but bills mandating the occasion went nowhere. The effort received more publicity when, after about a decade, shortly after the failure of a bill that was introduced by Rep. John Conyers Jr. of Michigan in September of 1979, Stevie Wonder released a song called “Happy Birthday.” Despite its cheery title, it was specifically meant to make a case for the holiday, calling out anyone who didn’t support the idea:

In 1981, President Ronald Reagan came into office, and he was reluctant to support the idea.

As TIME reported in February of 1982, his administration early on had trouble with a “sensitivity gap” when it came to minorities and women. When his Chief of Staff James Baker proposed a committee to try to fix that, one of the questions TIME suggested they might consider was the matter of MLK Day. “Until now the White House has been noncommittal,” TIME’s Laurence I. Barrett wrote. “The reason says something about this Administration’s isolation from the nation’s largest minority. An official explains that the White House has appeared so indifferent to other pleas involving racial matters that embracing the national holiday idea would seem condescending.”

By the following summer, however, it was clear that some version of the holiday bill was sure to pass. (It had been reintroduced in July, by Rep. Katie Hall of Indiana.) “Faced with inevitable congressional passage of a bill to make Martin Luther King‘s birthday a national holiday, Reagan swallowed his longstanding objections that this would open the door to many other groups seeking similar holidays and decided that he would support the measure,” TIME’s Walter Isaacson wrote. Furthermore, the next election season was already beginning. Though the Reagan campaign didn’t hope to win among black voters in 1984, making a grand gesture out of Martin Luther King Jr. Day could appeal to more moderate white voters.

Sure enough, that fall, King was granted an honor that had, until that time, belonged only to George Washington. Congress passed a bill designating his birthday as a national holiday, to be celebrated on the third Monday in January, starting in 1986.

It wasn’t an easy accomplishment: right up until the bill passed, Senator Jesse Helms concentrated on the idea that King had sympathized with Communists as a reason not to create the holiday, and Reagan in a news conference said that there was nothing wrong with Helms’ “sincerity” when it came to the issue. Helms had threatened a filibuster, tried to open King’s sealed FBI files and estimated that the cost of a new national holiday would be $12 billion in lost productivity. Reagan’s middle-of-the-road stance was also confirmed by the publication of a letter in which he told New Hampshire Governor Meldrim Thomson, who opposed the idea of a holiday, that he had reservations about King’s sympathy for Communists too, but that it didn’t matter because “here the perception of too many people is based on image, not reality.”

Nevertheless, Reagan signed the bill on Nov. 2, 1983. And, as two TIME readers wrote in a letter to the editor that ran in the Nov. 21, 1983, issue, the difficulty getting the holiday created wasn’t necessarily a bad thing: “As supporters of the King holiday bill, we thank Senator Jesse Helms for helping to secure the bill’s passage,” wrote Retta and Charles Gray of North Carolina. “Helms reminded us by his behavior of the freedoms the Rev. Dr. King fought for.”

Read the full account of the creation of Martin Luther King Jr. Day, here in the TIME Vault: A National Holiday for King 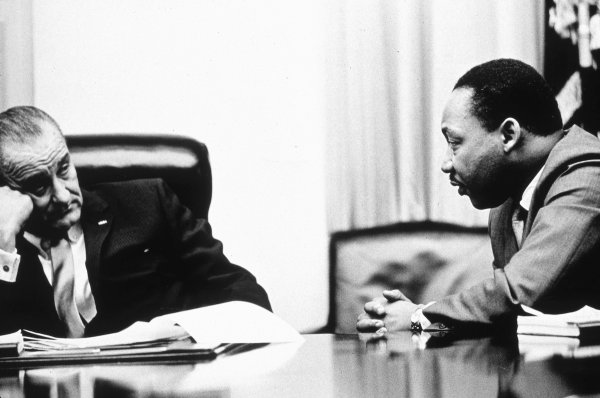 Why You Should Care That 'Selma' Gets LBJ Wrong
Next Up: Editor's Pick