Pedestrians walk by a now hiring sign posted in the window of a business on Nov. 7, 2014 in San Rafael, Calif.
Justin Sullivan—Getty Images
By Fortune

U.S. job growth remained brisk in December, with employers adding 252,000 jobs to their payrolls after November’s outsized increase. The nation’s unemployment rate fell to 5.6% from November’s 5.8%.

December marked the 11th straight month of payroll increases above 200,000, the longest stretch since 1994. With a revised 353,000 jump in November, and October’s count also revised higher, the economy created 50,000 more jobs than previously reported in the prior two months.

“The U.S. is sort of an island of relative strength in a pretty choppy global sea. People are worried the problems abroad could afflict the U.S., but our domestic fundamentals are pretty sound and should outweigh that,” said Josh Feinman, chief global economist at Deutsche Asset & Wealth Management in New York.

December’s gains capped a strong year for hiring. With another job creation number over 200,000, employment gains for 2014 at around 3 million — the largest since 1999.

A five cent drop in average hourly earnings after rising six cents in November, took some shine off the report.

Wage growth has been frustratingly tepid and economists believe the Federal Reserve will be hesitant to pull the trigger on raising interest rates without a significant increase in labor costs.

The U.S. central bank has kept its short-term interest rate near zero since December 2008. It has not raised interest rates since 2006, but recently signaled it was moving closer to hiking, even if inflation remains below the Fed’s 2.0 percent target. Most economists expect the first rate increase in June.

But an acceleration in wage gains is in the cards as the labor market continues to tighten.

That, together with lower gasoline prices are expected to provide a tail wind to consumer spending this year.

“As the labor market moves closer to full employment … we are likely to see firms increase wages. We have already started to see some of that,” said Sam Bullard, a senior economist at Wells Fargo in Charlotte, North Carolina.

Most of the measures tracked by Fed Chair Janet Yellen to gauge the amount of slack in the labor market have pointed to tightening conditions and would be again under scrutiny.

A broad measure of joblessness that includes people who want to work but have given up searching and those working part-time because they cannot find full-time employment is at six-year lows, the labor force appears to have stabilized, while the ranks of the long-term unemployed are also shrinking.

—Reuters contributed to this report 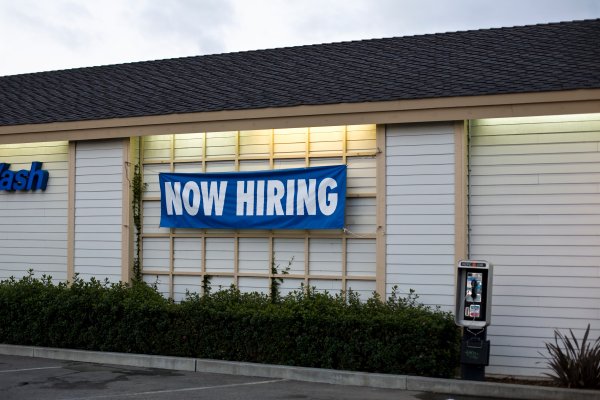 Layoffs By U.S. Employers at 17-Year Low
Next Up: Editor's Pick