As thousands of supporters clad in the red, white and green of Nigerian President Goodluck Jonathan’s People’s Democratic Party thronged the formal launch rally of his reelection campaign in Lagos on Thursday, thousands more were fleeing for their lives in the country’s northeast, where an ongoing militant offensive, launched on Jan. 3, has killed scores. Such twinned scenes of jubilation and carnage are likely to be a regular feature in Nigeria over the coming weeks, as the country gears up for Presidential and general elections on Feb. 14,—even as the Boko Haram militant group gains ground in a campaign that took more than 10,000 lives last year, and has driven more than 1.5 million people from their homes.

Residents of Baga, a small town on the shores of Lake Chad, and some sixteen surrounding villages fled on foot or by boat as members of Boko Haram razed buildings and stalked the streets in search of government supporters, according to local officials. “These towns are just gone, burned down,” Borno State Senator Ahmed Zanna told NBC News via telephone. “The whole area is covered in bodies.”

The offensive started on Jan. 3 with a daring raid on a multinational military base near Baga that had been established to combat crime in the lawless border region where Nigeria, Niger, Chad and Cameroon meet. It has since been repurposed to address the growing regional threat of Boko Haram, a militant Islamist group that got its start in northeastern Nigeria in 2002 and has used kidnapping—most notably of more than 200 schoolgirls last year—as an effective tactic. The base fell to the militants early Sunday morning, Jan 4, after several hours of intense fighting.

The second assault, which started in Baga itself on Jan. 6, appears to be an attempt by the rebels to assert their authority in an area of divided loyalties, according to Roddy Barclay, senior Africa analyst at Control Risks, a political risk consultancy based in London. “Boko Haram has frequently attacked communities perceived to support the government,” he says. “The use of violence is designed to drive community fear and compliance in order to further Boko Haram’s agenda.”

While that agenda has little to do with the elections on the surface—as staunch Islamist militants, Boko Haram, like other radical Salafist groups, does not believe in elections or democratic rule—attacks like this one will contribute to a general climate of fear that could result in a low turnout in the election, or a closing of the polls in the northeast all together. Despite the increasing violence, Nigeria’s national election commission has said it will not postpone the elections. This could lead to post-campaign turmoil, if the opposition All Progressives Congress party, which has stronger support among the Muslim-dominated north, feels that the outcome has been skewed against them. Violence could erupt, as it did in the wake of the contested 2011 elections that brought Jonathan to power.

The Baga attacks aren’t necessarily tied to the elections, says Barclay, but they will play into the general conditions that could make the election season more volatile. More attacks should be expected, he adds. “Boko Haram will be a key player in the 2015 elections. It will seek to disrupt the elections by staging targeted attacks and by seeking to incite broader religious violence.” The group played a similar role during the 2011 elections, but “in 2015 Boko Haram has far greater military capability than it did back then,” he says. “It will use those capabilities to stage attacks which impact both on local-level politics, but also potentially on the national scene.”

One of the principal reasons that Boko Haram has managed to grow in strength and reach over the past few years is because political disputes have sapped the will of the Nigerian government to fight back, according to Jacob Zenn, an analyst of African and Eurasian Affairs for The Jamestown Foundation, a DC- based research and analysis institute with a focus on terrorism. “There is a real lack of unified political will, making it difficult to develop a comprehensive and coordinated strategy to combat Boko Haram,” he says by telephone from Abuja, the Nigerian capital. “Until taking care of Boko Haram becomes a priority over concerns about the elections, there will be no way to contain the threat.”

Of course, many people in Nigeria’s government, military and civil society believe that if the elections go smoothly, “the new government will be able to prioritize the fight,” says Zenn. “However, if there is a period of post-election tension and infighting, it could make countering Boko Haram even more difficult.” That may be just what Boko Haram has in mind as it makes every effort to undermine security in the northeast, ensuring that elections don’t happen at all. 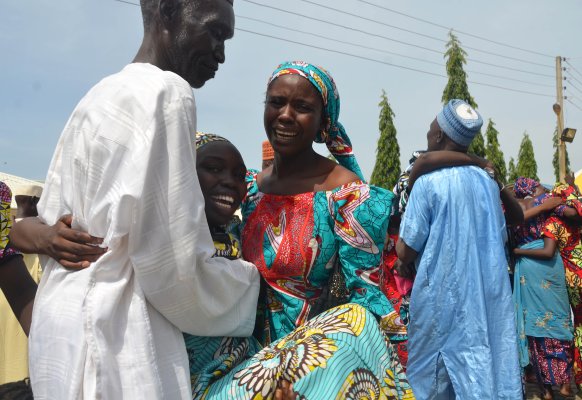