President and CEO of the Harlem Children's Zone, receives the Honorary Degree of Doctor of Humane Letters at Brandeis University's 63rd commencement on May 18, 2014.
Pat Greenhouse—Boston Globe/Getty Images
Ideas
By Daniel Mael
Daniel Mael is a senior at Brandeis University and writes for TruthRevolt.org and the Franklin Center for Government and Public Integrity.

Brandeis University, where I am a senior, sometimes goes to extremes to create “safe spaces” for its students. Case in point: last spring the university disinvited renowned international human rights activist Ayaan Hirsi Ali from attending commencement and withdrew awarding her an honorary degree because of comments she had made criticizing Islamism. In defending its indefensible position, Brandeis said that Hirsi Ali’s views were “inconsistent with Brandeis University’s core values” and prioritized the idea that student’s feelings wouldn’t get hurt over the opportunity to honor a champion of women’s rights.

In the end, Brandeis opted to create a safe space instead of an intellectual space, and the students who protested Hirsi Ali were comforted rather than challenged. To many, the university failed in its overarching mission.

On December 20, like other Americans, I was shocked when I heard about the horrific murders of NYPD Officers Wenjian Liu and Rafael Ramos. There was a clear consensus across the country that their execution-style murders were barbaric and grotesque. That night, however, Brandeis student leader Khadijah Lynch tweeted, “I have no sympathy for the NYPD officers who were murdered today” and “LMAO, all I just really don’t have sympathy for the cops who were shot. I hate this racist, f…ing country.”

Lynch, a Brandeis junior, was an undergraduate representative for the African and Afro-American studies department. As a student journalist who frequently writes about the culture wars on campus, I knew her comments were newsworthy. Here was a student leader at a well-known American university publicly condoning cold-blooded murder. So I wrote a short blog post highlighting Lynch’s public comments. These pieces usually generate a local response, but this post went viral.

This was not Lynch’s first bigoted tweet. In previous tweets since deleted, she has described Brandeis as “a social themed institution grounded in Zionism. Word. That a f…ing fanny dooly.” And she cannot understand why “black people have not burned this country down….” She describes herself as “in riot mode. F… this f…ing country.”

After my story was posted, online commenters, both anonymous and identifiable, made morally repugnant and offensive remarks about Lynch. Some even made death threats. I immediately condemned these sentiments. A journalist does not control how others react to a story he writes.

Now, however, I am the subject of a nasty and menacing campus backlash. “Kill the messenger” appears to be the “in thing” on the Brandeis campus. Students rallied to have me disciplined. Why? Because I reported a story worthy of public attention.

Threats of violence against me have been made and a group of students demanded in an email that the Brandeis administration hold me “accountable for [my] actions” and kick me out of school just one semester shy of graduation. I was also accused of “stalking” Lynch by reporting her public tweets and thereby defaming her character because of comments made by others. The university administration sent me an email instructing me “to have no contact with … in any way, shape or form” the student who sent that email. That contact ban has since been lifted. As far as I know, I have never spoken to this student in my time at Brandeis and would fail to pick him out of a police lineup. But if I were by chance to be in a room with this student, I could potentially face trouble in Brandeis’s student judicial system, as “[a]ny alleged violation(s) of these conditions should be reported to the Dean of Students Office.”

In addition, the Brandeis Asian American Student Association went so far as to state that they took “no official stance on the opinions that Khadijah has expressed” but that they stood “in solidarity with” her – even though one of the murdered Brooklyn police officers was Asian. One student even wildly claimed that I supported the threats made against Lynch.

A Brandeis official called Lynch’s comments “hurtful and disrespectful.” She resigned from her position in the African and Afro-American studies department. When I contacted Lynch for a comment about her tweets, she tweeted, “I need to get my gun license. Asap.” That tweet has also been deleted. I have now been accused of being a racist and being in bed with white supremacists since I made Lynch’s public tweets more public.

In my meeting with the Brandeis public safety officials to discuss the threats made against me, I was told that I should consider changing my dorm room, and that it is a reasonable expectation that my car would be vandalized. They also recommended that I purchase mace at the local Walmart.

Violent hatred directed toward any innocent is wrong—whether it is at student leaders at a university, police officers patrolling the streets, or student journalists doing their job. That many Brandeis students exhibit selective outrage and are willing to extol the virtues of free speech, but only when that speech confirms their preconceived biases, illustrates their hypocrisy in claiming to care about “civil rights.” Indeed, and sadly so, the Brandeis student body provided a louder defense of Lynch’s right to condone the murder of New York City police officers, and her hatred of America, than my right to report on it.

It is the threat of violence, expulsion, and attack for voicing your views that keeps tyrants in power—as Wednesday’s attack on satirical French newspaper Charlie Hebdo illustrates. The very marker of liberal societies is the ability to speak freely and openly regardless of who may be offended. There is no room for intimidation in the modern university, and campuses must aim to fulfill this ambition.

In a column about this incident, Alan Dershowitz wrote, “So welcome to the topsy-turvy world of the academic hard left, where bigoted speech by fellow hard leftists is protected, but counter expression is labeled as ‘harassment,’ ‘incitement,’ and ‘bullying.’ Imagine how different the reaction of these same radical students would be if a white supporter of the KKK had written comparably incendiary tweets.”

Regardless of political ideology, it is imperative that Brandeis community members unite to reject the calls for violence or physical harm with the same fervor that we demand freedom of speech. In doing so we can help shape a better future for our community and America at large. It is our rule of law that ensures our freedom of expression and enables us to envision a more positive path forward.

Daniel Mael is a senior at Brandeis University and writes for TruthRevolt.org and the Franklin Center for Government and Public Integrity. 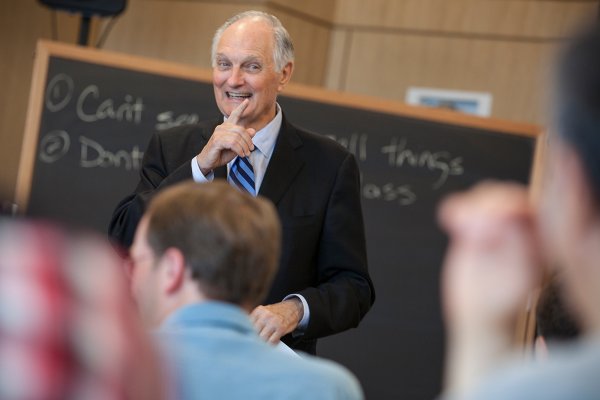 What College Professors Can Learn From Alan Alda
Next Up: Editor's Pick