The People's Choice Awards: You Did This to Yourselves

It’s the People’s Choice Awards! The actual popularity contest has as its claim to fame the fact that it’s the only awards show with prizes selected by We the People, its status as the first awards show of the season, and a *ahem* desirable Wednesday night from 9 to 11 p.m. time slot.

The People’s Choice Awards tend to favor people who don’t usually win critical praise, but are wildly popular, like the TGI Fridays or Uggs of film and television. For example, Drew Barrymore and Adam Sandler are both nominated for their roles in Blended, a film pretty much universally panned by critics. Prize-winning qualifications seem to include being young, attractive and available to sit in the theater on a Wednesday night.

Tonight’s show is hosted by Anna Faris and Allison Janney, who know that they are not the first choice for awards-show hosts, but they gamely point out that Oscar host Neil Patrick Harris was unavailable and Ellen DeGeneres was “busy” — cue the camera panning to DeGeneres and her wife Portia de Rossi sitting in the front row. After recovering from that awkward moment, the duo spent the rest of the evening re-enacting scenes from Mom, the sitcom that they were contractually obligated to repeatedly plug throughout the evening to diminishing returns.

Before the many, many awards start getting handed out at a rapid clip, Faris reminds us that these awards are truly a popularity contest. Actual people actually chose the categories and the winners. For deigning to do our civic duty and vote, we get to sit through two-plus hours of CBS promotions, Walgreen’s plugs and the occasional bright spot like Chris Pratt showing up (sort of) to support his wife, Rainn Wilson being Rainn Wilson and Amy Adams giving Ben Affleck his prize as the people’s favorite humanitarian. Plus, there were performances by Lady Antebellum, Iggy Azalea and Fall Out Boy to help while away the hours.

Favorite Comedic Movie Actress: Melissa McCarthy took the prize for her fine work in Tammy, beating out Drew Barrymore for Blended, Charlize Theron for A Million Ways to Die in the West, newlywed Cameron Diaz and even Tina Fey.

Favorite Comedic Movie Actor: Adam Sandler, because despite what some of the staff of Sony might think (according to their leaked emails), America apparently still loves them some Sandler. While Blended topped TIME’s list of the worst movies of 2014, Sandler bested 22 Jump Street’s Channing Tatum, Neighbors’ Seth Rogen and Zac Efron, and Jonah Hill, who was seemingly nominated for his general existence.

Favorite Hip-Hop Artist: To introduce this category, the producers chose Parenthood stars Monica Potter and Dax Shephard, who are admittedly “over 40, super duper white and suburban.” Luckily, the winner perfectly fit that demographic (plus, she was already in the house): Iggy Azalea. Sorry, Jay Z, apparently the people are no longer in an Empire State of Mind.

Favorite Male Country Artist: Lady Antebellum performed and stuck around to name Hunter Hayes as the reigning king of country, even though he’s really more the dauphin of country, if anything. The young’s beat out Luke Bryan, Brad Paisley, Blake Shelton and Tim McGraw.

Favorite TV Icon: Ellen DeGeneres, who has 15 Waterford Crystal awards for favorite daytime TV host lining her mantel (several mantles probably), showed up to present the award. We’re going to take a wild guess that Betty White is the winner, because she is sitting in the front row, and they probably don’t wheel the 93-year-old off the Hot in Cleveland set for nothing. And, sure enough she does. Congratulations! By the way, DeGeneres won for daytime TV host again, too. After 15 wins, none of the other nominees even bothered to show up.

Favorite Cable TV Actor: The award went to Matt Bomer for his work in the final season of White Collar. He claimed victory over Sons of Anarchy star Charlie Hunnam, Sean Bean, Eric Dane and William H. Macy, because the people are just really into White Collar, apparently.

Favorite Comedic TV Actress: Kaley Cuoco-Sweeting, which you probably guessed, because she was already in the theater for a The Wedding Ringer plug at the beginning of the show. In the 59 seconds she was allotted for accepting her prize for The Big Bang Theory, she managed to thank Chuck Lorre, make a bid for staying on the show for the rest of her life, and plug The Wedding Ringer. Now that takes talent.

Favorite Country Band: Lady Antebellum is probably contractually obligated to win, as they already performed and there appears to be some sort of quid pro quo going on. To their credit, they do manage to make some very surprised faces when their name is called.

Favorite Humanitarian Award: To hand out the award to the A-List star, the producers brought out an A-List presenter, specifically, Amy Adams, who presented Ben Affleck with the prize for his humanitarian efforts in the Congo (which seemingly crashed the Eastern Congo Initiative website). Since Affleck was already there, the producers shoved the Favorite Thriller Movie Award for Gone Girl into his gift bag.

Favorite Dramatic Movie Actress: Entourage (minus Drama plus skinny Turtle) came to promote their forthcoming movie and hand an award to Chloë Grace Moretz for her work in If I Stay. Sorry Meryl Streep, the people have spoken and Moretz was the best actress last year.

Favorite TV Drama: It’s a two-fer! Grey’s Anatomy, which is definitely the best drama on television right now, took the prize, and since the cast was already on stage the producers gave star Ellen Pompeo the statue for favorite dramatic TV actress. This award show is nothing if not economical.

Favorite Actress in a New TV Series: Viola Davis takes home the well-deserved crystal wedge for her work in How to Get Away With Murder. This is the first award of the night that might actually be a precursor to wins at the Golden Globes, SAG and/or NAACP awards.

Favorite Movie Actor: Spoiler alert: the camera panned past Robert Downey Jr. a minute ago, so he’s going into this as the front runner. Surprise! He took not one, but two prizes, collecting favorite dramatic movie actor as well. It’s his fourth consecutive People’s Choice Award, and while he didn’t seem to prepare a speech, he did promise to eat up the fans because he loves them all so much.

Favorite TV Show: The Big Bang Theory collected their fourth consecutive prize and delivered a heartfelt speech about how much they love their fans and doing the show. They were also handed the trophy for favorite network TV comedy, because why not.

As the show wrapped up, Alison Janney returned to the stage to quickly shout out a few other winners, which will undoubtedly be listed on the website eventually. Several awards were given off-camera, because if all the awards (there are a lot of categories) were shown it would have ran so long it would have preempted Mom, and we couldn’t have that. Oddly, what one would think were some of the biggest awards, like favorite movie and favorite movie actress, were also left out of the live show, probably because they couldn’t get anyone to show up. Two off-camera prizes that they did announce were:

Favorite Cable Sci-Fi/Fantasy TV Show: Outlander (over The Walking Dead, Doctor Who, American Horror Story and Game of Thrones) with a quick cut to the stars hoisting their prize in the air from their seats.

Favorite Competition TV Show: The Voice, which is produced by Mark Burnett, who just so happens to be in the theater, because he is producing a little show called the People’s Choice Awards.

Congratulations to all the winners. Can’t wait to see who the people choose to run the country in 2016. 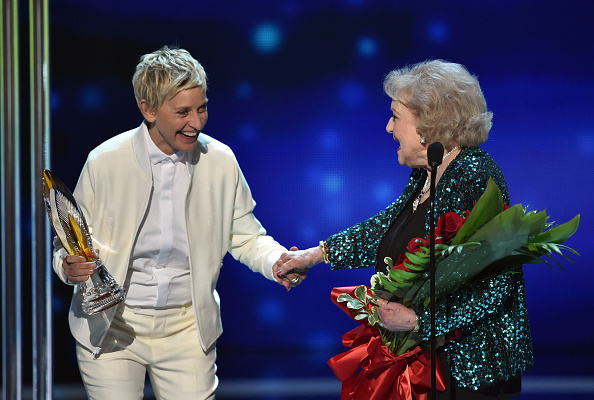 People's Choice Awards 2015: The Winner's List
Next Up: Editor's Pick