The father of Florida State quarterback Jameis Winston says he will forego his final two seasons of eligibility and enter the 2015 NFL Draft, according to ESPN.com’s David Hale.

According to the report, Winston will announce he is leaving school on Wednesday.

Winston, the 2013 Heisman Trophy winner, is expected to be a top pick in the Draft, which will be held April 30-May 2 in Chicago. Winston lost only one game as a starting quarterback, a 59-20 loss to Oregon in the College Football Playoff Semifinals.

Though he excelled on the field, Winston’s time at Florida State was plagued by off-the-field problems.

In December 2012, Winston was accused of sexually assaulting a fellow student. Investigators looked into the case nearly a year later and decided not the charge Winston because of lack of evidence. He was then investigated for violating four sections of the school’s code of conduct and could have been expelled if he was found guilty. He was cleared in all cases.

The school is still being investigated by the U.S. Department of Education on how it handled the Winston case, which could be a possible Title IX violation.

Winston was suspended for one game this season for using vulgar language in the student union and was cited for shoplifting $32.72 worth of crab legs and crawfish from a Publix in Tallahassee in February.

In Winston’s two seasons with Florida State, he threw for 7,964 yards with 65 touchdowns and 28 interceptions. 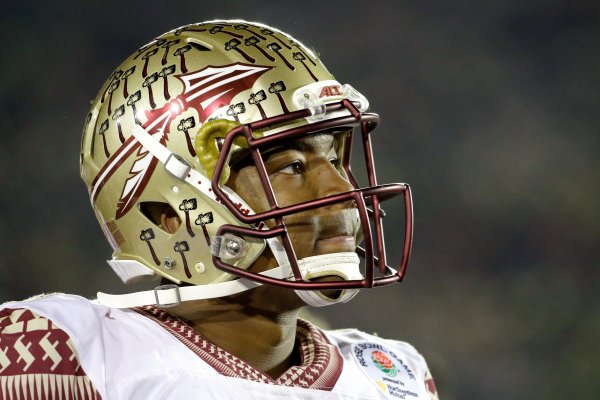 Jameis Winston Is 'Seriously Considering' Return to FSU
Next Up: Editor's Pick