At least 12 people have been killed in an attack on the Paris satirical newspaper Charlie Hebdo, after masked gunmen entered the offices and opened fire before fleeing in a hijacked car. More than 3,000 police officers are reportedly involved in the manhunt for the suspected attackers. It’s the deadliest terrorist attack in Europe since the London attacks in July of 2005, former CIA Deputy Director Mike Morell told CBS This Morning. Below, reactions from world leaders:

Barack Obama: “I strongly condemn the horrific shooting at the offices of Charlie Hebdo magazine in Paris that has reportedly killed 12 people. Our thoughts and prayers are with the victims of this terrorist attack and the people of France at this difficult time. France is America’s oldest ally, and has stood shoulder to shoulder with the United States in the fight against terrorists who threaten our shared security and the world. Time and again, the French people have stood up for the universal values that generations of our people have defended. France, and the great city of Paris where this outrageous attack took place, offer the world a timeless example that will endure well beyond the hateful vision of these killers. We are in touch with French officials and I have directed my Administration to provide any assistance needed to help bring these terrorists to justice.”

François Hollande, President of France (translated): “No barbaric act will ever extinguish the freedom of the press. We are a united country that will react as one.”

David Cameron, Prime Minister of the United Kingdom: “The murders in Paris are sickening. We stand with the French people in the fight against terror and defending the freedom of the press.”

Jean-Claude Junker, President of the European Commission (translated): “I am deeply shocked by the brutal and inhuman attack that hit the offices of Charlie Hebdo. This is an intolerable act, a barbarism that concerns us all as human beings and Europeans. My thoughts are with the victims and their families. I express in my own behalf and on behalf of the European Commission, our greatest solidarity with France.”

Michael Roth, Minister of State for Europe at Germany’s Foreign Office (translated): “Freedom of expression is a right of non-negotiable human. My thoughts are with the families of the victims.” 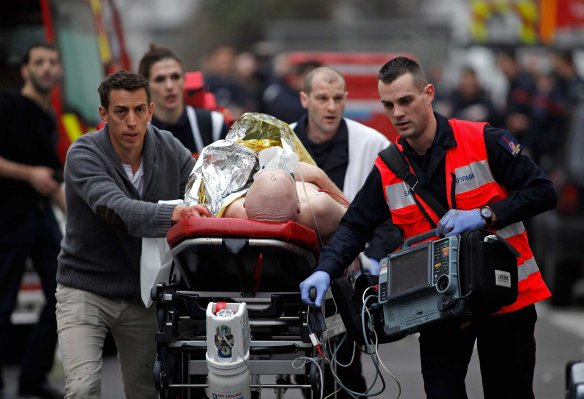 Witness Scenes From the Paris Police Response to the Charlie Hebdo Attack
Next Up: Editor's Pick