At 10 he was forced to become a child soldier and he rose to become a commander of child soldiers. Now Dominic Ongwen, a senior commander in Joseph Kony’s Lords Resistance Army [LRA], a cult-like rebel group that started in Uganda, has surrendered to members of a joint military task force run by the United States and the African Union.

According to U. S. State department spokeswoman Jen Psaki, U.S. officials have yet to confirm that Ongwen, who declared his defection from the group in the Central African Republic on Tuesday, is who he says he is, but Ugandan army spokesman Lt. Col. Paddy Ankunda trumpeted a rare success in the region-wide hunt for the group best known for amputating the limbs of detractors and turning young children into soldiers and sex slaves. “This is great news,” says Kasper Agger, the Uganda-based field researcher for the Enough Project, a Washington D.C.- based human rights advocacy organization that has been tracking the Lords Resistance Army across Uganda, South Sudan, Congo and the Central African Republic. But whether or not Ongwen’s defection will lead to the eventual capture of Kony “is the million dollar question,” says Agger. “We can hope that he has vital information to share, but nailing down Kony at a specific time and place is still very difficult.”

According to Psaki, the defection of Ongwen, 35, would “represent a historic blow to the LRA’s command structure.” Ongwen, who was abducted by the LRA on his way to school according to Agger of the Enough Project, quickly made his way up the ranks to become a brigade commander, collecting multiple charges of grievous human rights abuses along the way. In 2005 the International Criminal Court in The Hague indicted Ongwen for seven counts of crimes against humanity including murder, pillaging and enslavement.

Ongwen’s defection, says Agger, may be a sign of weakening leadership within the organization, but it is also possible that the commander may have had a falling out with Kony and was in fact fleeing for his life. “We do know that he had been increasingly marginalized over the past few years,” says Agger, but Kony also has a tendency to pull commanders back into the fold as younger, less experienced soldiers die off. “So he could still have some useful information.” Ongwen’s defection may be a “victory along the road” says Agger, but it is no reason to rest in the hunt for Kony. “If anything, it’s an encouragement to keep up the pressure, to make sure that we see this through to the end, and that the Lords Resistance Army is truly finished.” 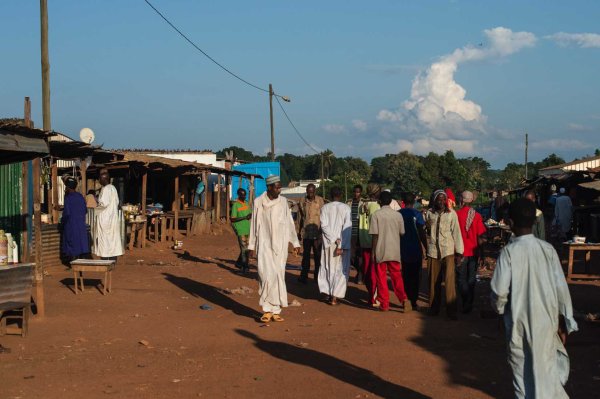 Hundreds of Muslims Are Trapped in Enclaves in the Central African Republic
Next Up: Editor's Pick