Row Over Budget Airlines Erupts in Indonesia After AirAsia Disaster

AirAsia aircraft on the strip at Soekarno-Hatta International Airport near Jakarta on Dec. 29, 2014
Anadolu Agency—2014 Anadolu Agency
By Charlie Campbell and Yenni Kwok

A political row between Indonesia’s Transport Ministry, low-cost air carriers and the flying public is threatening to overshadow the ongoing salvage operation for AirAsia Flight QZ 8501, which crashed on Dec. 28 soon after leaving the Indonesian city of Surabaya for Singapore.

Indonesian news portal Detik reported Wednesday that bargain tickets offered by low-cost carriers — some of which go for as little as $4 — were to be banned.

AirAsia didn’t immediately respond for TIME’s request for comment on the policy shift. However, Indonesian social-media users were scornful because the nation’s 250 million people increasingly rely on air travel to hop around the world’s largest archipelago, as well as travel abroad for leisure and work.

Some 700,000 Indonesian migrant workers are dispersed around Asia, chiefly in Malaysia and Saudi Arabia, with remittances sent to family back home reaching $6.6 billion in 2009.

Any restrictions would also not be good for airlines such as AirAsia, already reeling from allegations by Indonesian officials that Flight QZ 8501 was only cleared to operate a few days each week, but crucially not on the Sunday when it crashed. AirAsia CEO Tony Fernandes vehemently denied this was the case in a statement on Wednesday, describing the mix-up as “purely an administrative error.”

“We have the right to fly Surabaya-Singapore. We had flown that schedule and had rights for seven days a week,” he stated, according to the Straits Times. “We have secured both slots as well as approval from both Indonesia and Singapore.”

Indonesian authorities also criticized AirAsia Captain Iriyanto, who piloted QZ 8501, for apparently not picking up the air-traffic control’s weather-briefing document before his flight, as they claimed regulations require.

However, Fernandes defended his staff in a statement issued to CNN Wednesday, saying that the same meteorological data is disseminated electronically to all flight crew by AirAsia, whose practices mirror those of many other airlines.

Commercial airline pilots also rallied to Iriyanto’s defense. “Don’t make things up and say pilots are at fault if they don’t undergo briefing. It is not part of the required procedures [before taking off],” senior pilot Sardjono Jhony Tjitrokusumo said in a written statement, the Jakarta Globe reported. “Don’t suddenly become an aviation expert, as if you know everything about the industry. Please be wise.” 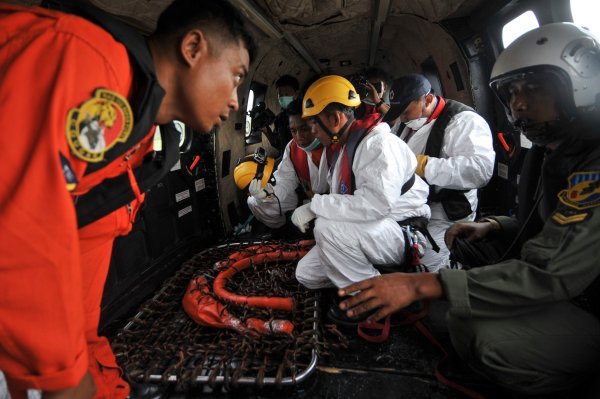 Tailpiece Found in AirAsia Search
Next Up: Editor's Pick