Indonesia Says the AirAsia Tailpiece Has Been Found

Search-and-rescue workers and flight crew prepare their gear on board an Indonesian air force's Super Puma helicopter at Iskandar air-force base in Pangkalan Bun, Indonesia, before a search mission for debris and bodies from AirAsia Flight QZ 8501 on Jan. 6, 2015
Veri Sanovri—Reuters
By Charlie Campbell

The tailpiece of AirAsia Flight 8501 has been found at the bottom of the Java Sea, Indonesia’s search-and-rescue agency Basarnas confirmed Wednesday, raising hopes that investigators may soon learn what made the Airbus A320-200 crash.

Speaking at a press conference in Jakarta, the head of Basarnas, F.H. Bambang Soelistyo, said, “We have a picture of the part and we can confirm that it’s the tail.”

The tailpiece is where the aircraft’s “black box” flight-data recorders are located, with the information stored on them offering the best hope of explaining why the aircraft disappeared 42 minutes after leaving Indonesia’s second city Surabaya for Singapore early Dec. 28.

Bad weather is still thought to be a key contributor, as the pilot asked to change course and climb from 32,000 ft. to 38,000 ft. to avoid a storm system, but no distress call was received.

The find also raises hopes of recovering more bodies. Only 40 of the 155 passengers and seven crew have so far been recovered, and investigators suspect most bodies may still be strapped into their seats in the stricken plane’s fuselage, which could be located somewhere near the tail.

The black boxes are fitted with locator beacons, but they only have around 20 days of their 30-day battery life left to run. Divers have been trying to approach the wreckage but have been hampered by large waves and strong currents caused by Southeast Asia’s fearsome monsoon. 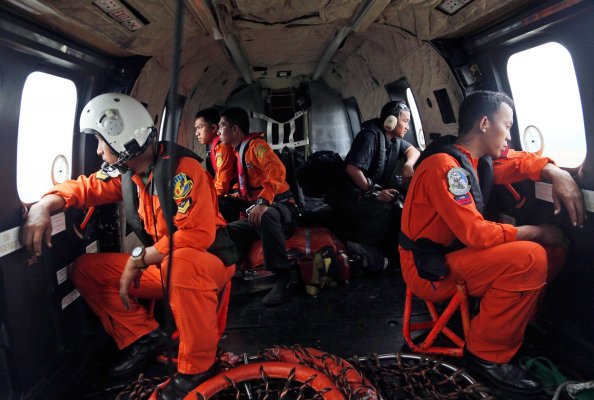