“Jones has checked himself into a rehab center,” Bob Bennet, executive director of the Nevada State Athletic Commission, told ESPN on Tuesday. “And at this time, I would direct any further questions regarding his situation to Mr. Jones or the UFC.”

Traces of benzoylecgonine, a metabolite of cocaine, were found in a pre-fight urine test taken by the champ. However, in accordance with World Anti-Doping Agency regulations, Jones’s win on Jan. 3 over Daniel Cormier at UFC 182 will stand, as the fighter was not on the substance during competition.

“I am proud of Jon Jones for making the decision to enter a drug treatment facility,” said White in a statement. “I’m confident that he’ll emerge from this program like the champion he truly is.” 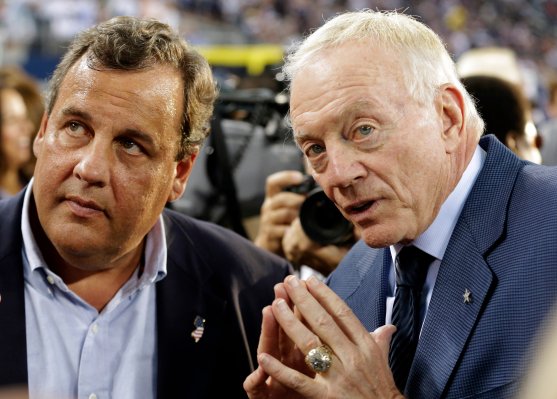 No Lawsuit Can Stop Chris Christie–Jerry Jones Bromance
Next Up: Editor's Pick