House Speaker John Boehner of Ohio, kisses House Minority Leader Nancy Pelosi of Calif. after being re-elected to a third term during the opening session of the 114th Congress on Capitol Hill in Washington on Jan. 6, 2015.
Pablo Martinez Monsivais—AP
By Ryan Teague Beckwith

John Boehner took control of the House of Representatives for his third term as Speaker on Tuesday, and as before, he went for an attention-grabbing gavel.

The gavel, which seems to be the legislative equivalent of Thor’s hammer Mjölnir, was made by hand by one of Boehner’s Ohio constituents just after the November 2010 elections that first propelled Republicans into the majority, according to the New York Times.

As part of a longstanding tradition, House Minority Leader Nancy Pelosi presented Boehner with the gavel and the two shared an awkward hug.

As TIME previously noted, the gavel is not the one he uses every day. Those smaller gavels come from the House Carpentry Shop, which makes them on site from maple wood. 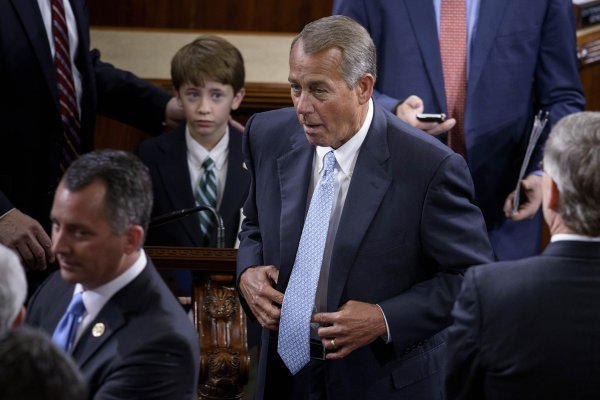