The Bachelor is back, and they have found themselves a true believer to star this season — Chris Soules, whom we last saw vying for the heart of Andi Dorfman on The Bachelorette. While the process may have failed Chris once, his faith has not faltered. He opens the show by counting the reasons why he knows The Bachelor is the best way to find love. And we lucky viewers get to follow along (and make farming puns) as he sows the seeds of love in the fertile field of at least one of the 30 women producers have invited to vie for Prince Farming’s heart.

But before we get to meet the shiny new Bachelor, we have to slog through the washed-up detritus from the sea of former stars sporting new engagement rings, children and, in the case of Sean, beard. Sean and his creepy flesh-colored beard and his prize bride Catherine claim to love their quiet life in Dallas. Real talk, though, Catherine must have some residual anger from her time elbowing other women out of the way during their televised courtship to let him on television with that beard. Chris pesters them about children, but they are apparently still in contract negotiations with ABC over their birth plan, so they won’t admit anything on the red carpet. Catherine claims that she feels for the women and hopes they keep it together tonight. Chris Harrison admits that one poor Tara (but no Sierras or Ashleys or AshLees) drank a little too much during the first cocktail party. Is he a precog or has he just lived through 19 relentless seasons of this show? Either way: um, spoiler alert!

Marcus and Lacy are still planning their wedding. Or rather, Marcus is writing poetry, and Lacy is planning the wedding, because she has trained for this her entire life. Then Andi shows up with Josh in tow and the good news that they are engaged! Yes, they were supposedly engaged on the finale of The Bachelorette when Josh slipped an enormous Neil Lane diamond on Andi’s perfectly manicured finger, but that was just a fiction and this is IRL. But Andi’s engagement is old news, because Nikki, fresh off her breakup with Juan Pablo, is in the house, and Chris has to “welcome her back to The Bachelor family,” which is like the Source Family but with more Spanx.

Chris grilled her about her time with Juan Pablo, and she used the phrase “stand by my man” twice. Much to Chris Harrison’s (and America’s) chagrin, Nikki doesn’t seem interested in slamming Juan Pablo. She shrugged off their breakup to the fact that she’s a nurse in Kansas City and he is in the entertainment industry in Miami. She’s not a quitter, but she knew she would never be his priority, and they would never see eye to eye on a number of issues, and basically he’s a big old jerkface and she’s an enabler waiting around for a Lifetime movie to be made of her life. She has no regrets, though.

Finally it’s time for Chris to take the spotlight, which he does by working out with Cody Sattler in the farm yard before saddling up his steel horse and hitting the mean streets of L.A. He drives straight to the Bachelor wardrobe department, where he shows off the Bachelor-ready abs he worked so hard for with his trainer Cody. Photo shoot done, he heads back to Iowa for another shirtless montage, and then it is finally time to meet the women and start the animal husbandry.

First Out of the Limo: Britt, a comely waitress, gives Chris an Omega hug and cries in his arms and makes some serious eye contact and gives him a certificate for a free hug. She’s so attractive that it makes you suddenly realize the possibilities when tabloids say George Clooney or Matt Damon are dating a waitress. Britt is followed by Whitney, a baby-voiced fertility nurse who with every on-the-job success is confronted by her personal failures. Kelsey is an attractive Texan widow while Megan is a make-up artist who Chris dubs “Blondie” because she’s a blonde, and he’s creative. Then there’s Ashley, representing the freelance journalists in the world. There’s Trina a blond who doesn’t merit a “blondie” shout-out as well as a full-grown woman who thinks handing Chris a teddy bear is a path to love.

Worst Heart Attack: Reegan comes out of the limo with a big target over her head and a cooler in hand. She’s not handing Chris a cold one, although he probably needs one, but is instead carting organs around. She sells cadaver tissue for a living and instead of using her one-on-one time to focus on her intellect, ambition and all-American good looks, she decides to flaunt her weirdest feature and hand it to Chris in a mini-Igloo. Chris takes the cooler and basically reenacts the scene from Se7en before she admits the human heart she just handed him is fake. Chris politely thanks her because he might need an extra heart. He does have good manners.

Fish Tale: Tara is a sport-fishing enthusiast who made the bold sartorial choice to forgo the traditional cocktail dress and steps out of the limo wearing cut-offs and cowboy boots. Chris appreciates her realness, but the women gasp in shock and horror. She orders a Jameson on the rocks and suddenly it clicks. She is the Tara. She doesn’t stop there. She then sneaks out the back of the mansion, slips back into the limo and re-emerges in a dress.

… and Then There Were More: There’s Amanda, the wide-eyed ballet teacher who slips out of the limo and hides behind Chris to be his secret admirer until he walks inside the house. There’s Jillian, who invites Chris to the gun show and makes him feel her muscles, and MacKenzie, a dental assistant who has a son with the farmer-friendly name of Kale. There’s Ashley S., a hairstylist who kind of looks like Courtney Thorne-Smith and shoves a penny in Chris’ “soul,” and current favorite contestant Kaitlyn, who is a dance instructor with the mouth that would shock a sailor, who suggests that Chris “plow the f— out her field any day.” He is stunned into silence. And then she teaches him to break-dance.

Surprise! After 15 women pour out of the limo and start elbowing each other for a chance to chat with Chris, there’s a lull that the producers try to make us believe is the end of the onslaught. Once the women start feeling slightly comfortable, the producers point and laugh and bring in three more limos full of buxom, sequined, plucked, waxed and spray-tanned beauties.

More Limos, More Ladies: Here comes Michelle, a wedding-cake decorator who dresses like a wedding-cake topper; Juelia, an esthetician from Portland; Becca, a romper-clad woman from San Diego; and Tandra, who shows up riding a motorcycle in a floor-length cocktail dress, which should qualify her for a spot on America’s Got Talent. There’s Alissa, a flight attendant who brings a seatbelt because it’s going to be a bumpy ride; Jordan, a student who brought him some whiskey; Nicole, in a pig nose who wanted to “ham it up”; Brittany, a WWE Diva in training; and Carly, a cruise-ship singer who may not realize that Iowa is nowhere near the ocean.

But Wait, There’s More: There’s Tracy, a fourth-grade teacher whose student earned some extra credit by helping pimp out her prof; Kimberly, who wants to bring yoga to Arlington; Kara, a high school soccer coach who wants to make beautiful babies with Chris as soon as possible (the fertility nurse could help!); Jade, a cosmetics developer who is willing to swap L.A. for Iowa; and Bo, a plus-size model who wants to try out Chris’ beef and pork, which may or may not be a euphemism.

The Cocktail Party: With 30 women vying for Chris’ attention, things quickly descend into Lord of the Flies-like chaos, and if anyone knew which girl it was who had come dressed as a piggie, she would definitely be toast. Instead, Tara gets wasted, stumbling and slurring her way to the rose ceremony, while Ashley S. starts hollering about onions, onions, onions everywhere!, and then makes a frenemy of the Diva in training.

Bachelor Milestone: Chris and Britt make out on the settee on the lanai until they can’t anymore, due to shame and/or producers.

The Rose Ceremony: Kaitlyn, the potty-mouthed dance instructor gets the coveted First Rose. She is followed by Jade, who may have used her couch time to ask Chris his go-to karaoke song, and the Top 3 is rounded out by Samantha, whom I have never before seen in my life. Ashley I. comes out repping hard for journalists (or angling for a job at Modern Farmer), followed by a tall blonde in a black dress, a Nikki, a Kelsey, a Megan, an Alissa, an Amber, Juelia, Becca, Trina, Sleepy, Mopey, Doc and Tracy. Chris had doubts about giving a Tara a rose, but decides to do it anyway, much to everyone’s horror. Jillian doesn’t flex once when she collects her rose. Whitney and Carly barely make it in under the wire.

The Final Rose: Ashley. Apparently Chris has a thing for onions. He is a farmer after all.

Who Went Home: It doesn’t matter, because everyone who left went home thinking they were worse than the drunk girl.

Boomerang: As the cocktail party ends, Kimberly, the yoga instructor from Long Island, cries into the camera about how she is worse than the drunk girl and then decides to go talk to Chris about this. She heads back inside the mansion, interrupts the champagne toast and demands answers. Unfortunately, we won’t get to find out what happens until next week.

What to Expect This Season: Tears, scandal, tear-inducing scandals and ultimately love. 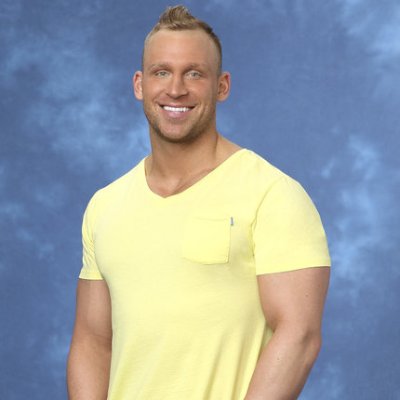 We Skyped with <i>Bachelorette</i> Hunk Cody About Chris Soules, <em>Bachelor</em>-Ready Abs and Making It Work in Iowa
Next Up: Editor's Pick