Police said New Orleans Saints linebacker Junior Galette was arrested Monday in Kenner, La., and booked on misdemeanor charges of domestic violence and simple battery, according to Ramon Antonio Vargas of The Advocate.

Galette’s cousin, Terrence Banks Jr., was booked on the same charges. Galette is accused of pushing a woman to the ground at his home in Kenner, a suburb of New Orleans. The push reportedly caused visible injuries to the victim.

The woman involved and Galette have differing accounts of the incident. The woman maintains that she is Galette’s ex-girlfriend and personal assistant and that Galette and his cousin “jumped” her, while Galette says she is a dancer and that he was trying to get her to leave his home.

The woman allegedly armed herself with a knife and was picked up and removed from Galette’s home after she put down the knife, at which point she called police.

Galette and Banks were still in custody as of Monday morning but will be able to post bond.

A Saints spokesman said the team was aware of Galette’s arrest and was collecting further information, the New Orleans Times-Picayune reported.

The 26-year-old joined the Saints as an undrafted free agent in 2010 and has been with the team since, recording 45 total tackles and 10 sacks this season after being voted a team captain. He signed a four-year contract extension worth a reported $41.5 million in September.

Galette’s arrest comes after a season in which the NFL became embroiled in controversy over the issue of domestic violence, initially brought on by the arrest and subsequent suspension of then-Baltimore Ravens running back Ray Rice last offseason. 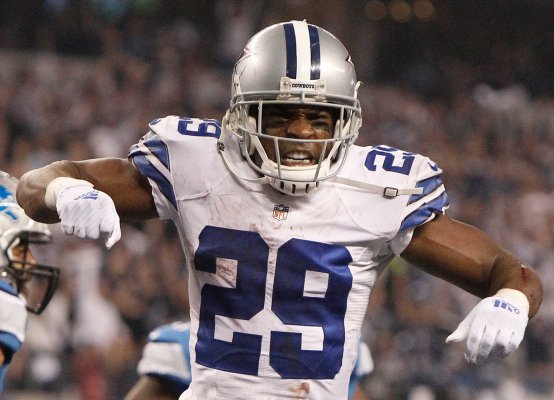 Cowboys Beat Lions After Controversial Call in 4th Quarter
Next Up: Editor's Pick