Ohio Rep. John Boehner has little to be worried about in his reelection bid for House Speaker, but as in past leadership elections, some Republicans will make some splashes of protest to show that the conservative flank still holds some sway.

Two months ago, no conservative candidate came forward to run against Boehner after the House GOP took its largest majority in decades. Establishment Republican candidates cruised past primary contests to flip the Senate. But a day before the Tuesday vote, two Republican members—Reps. Louie Gohmert and Ted Yoho—have announced that they will run to end a third Boehner term and several others have said that they will vote to oust their leader.

Yoho, who has voted against Boehner in previous leadership elections, says that he decided to jump in the race on Friday night after a colleague conservatives had been clamoring for would not. He cites a number of reasons why he protests another two years of Speaker Boehner, including to change the way Washington governs by crisis, to repeal and replace Obamacare, and to beat back a host of executive actions. Yoho says that he will achieve his goal to push Boehner to a second ballot, which would increase momentum against him.

“It’s also responding to our base,” says Yoho. “Everyone—whether it’s a town hall, a tele-town hall, live meetings, whatever—they say, ‘when are you getting a new Speaker of the House? Mr. Boehner has got to go; he’s a weak leader.’”

The anti-Boehner crowd is aided by outside conservative groups such as FreedomWorks and conservative commentators such as Erick Erickson and Fox News host Sean Hannity, who prefers South Carolina Rep. Trey Gowdy for Speaker. But so far these Republicans still have to convert several of their colleagues to reach the 29 necessary to push the vote to a second ballot.

The Congressmen who won’t vote for Boehner include Iowa Rep. Steve King, the immigration hardliner, and Rep. Dave Brat, the freshman who defeated former House Majority Leader Eric Cantor in a primary last year. Overall, 10 Republican Congressmen have announced they wouldn’t vote for Boehner, according to the Washington Post.

Boehner allies claim that conservatives within the GOP ranks have helped create crises like the 16-day partial government shutdown in 2013. And despite conservatives’ wishes, Boehner has few methods available to oppose like executive actions like the recent one that delays deportations for up to five million undocumented immigrants. Leadership allies like Oklahoma Rep. Tom Cole believe that Boehner will easily brush back the conservatives’ attempts to push the vote to a second ballot, according to his spokesman. 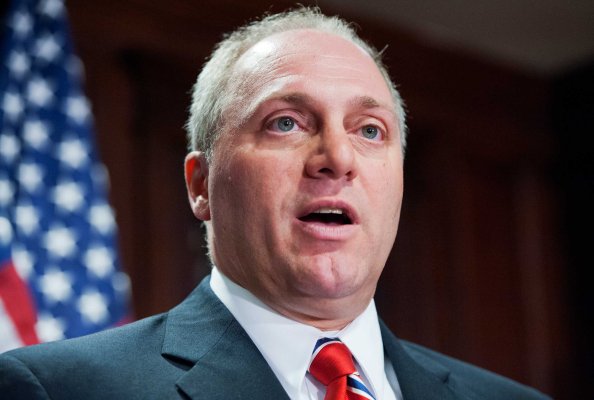 White House Turns the Screw on Steve Scalise
Next Up: Editor's Pick