Russian anti-Kremlin opposition leader Alexei Navalny speaks as he attends the verdict announcement of his fraud trial at a court in Moscow on December 30, 2014.
Dmitry Serebryakov—AFP/Getty Images
By Dan Kedmey

A leading protest figure in Russia’s beleaguered opposition camp defied the terms of his house arrest on Monday, announcing that he had severed a tracking device that he was ordered to wear by a Russian court.

Alexei Navalny posted a picture of a severed bracelet on his blog, Reuters reports.

“I refuse to comply with the requirements of my illegal detention under house arrest,” Navalny wrote on the blog, which draws up to 1 million readers a month. “The bracelet with some effort has been cut off with kitchen scissors.”

Navalny was handed a suspended sentence in late December on charges of embezzling 30 million rubles from two firms. Russian authorities launched an investigation against Navalny in 2010, shortly after he exposed evidence of corruption in Russia’s state-owned corporation amounting to $4 billion in fraudulent payments. 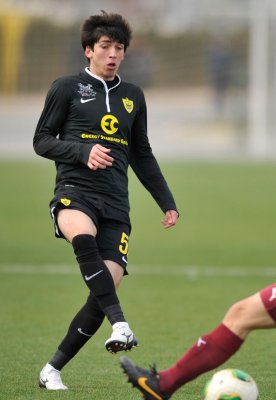 Russian Soccer Player Shot and Killed While Driving
Next Up: Editor's Pick