America Is Getting More Non-Religious, But Congress Is Not

The Capitol Dome and the Capitol Christmas Tree are illuminated in Washington D.C. on Dec. 11, 2014.
J. Scott Applewhite—AP
By Maya Rhodan

Congress changed a fair amount after the recent elections, with Republicans taking over the Senate and a slew of retirements from both parties. But in one major way, the new crop of lawmakers being sworn in tomorrow will be the same as ever: they are religious.

About 92% of members in the now- GOP controlled House and Senate identify as Christian, according to a new Pew Research Center study, only a small bump from the 90% Christian 113th Congress. Over half of members are Protestant and about a third are Catholic, both of which are among the most common religious affiliations among American adults.

But despite the growing number of Americans who don’t affiliate with any religion, there will be very few lawmakers who are not religious.

According to the data provided by the Pew Research Center and CQ Roll Call, Rep. Kyrsten Sinema (D-Ariz.) is the only member of Congress who currently identifies herself as religiously unaffiliated. (Sinema, however, also doesn’t consider herself a nonbeliever; she says she prefers a “secular approach.”) By comparison, about 20 percent of Americans say they are religiously unaffiliated.

Only two known atheists have served in Congress in recent years: Democratic Reps. Barney Frank of Massachusetts and Pete Stark of California, though Frank didn’t announce his atheism until after leaving office. As the Huffington Post notes, he was more comfortable coming out as the first openly gay member of Congress in 1987 than coming out as a nonbeliever in 2012.

Smaller religious groups including Buddhism, Islam, and Hinduism are more proportionately represented in Congress: according to the data about 2% of American adults are Muslim, Buddhist, or Hindu, and 1% of Congressional members practice those faiths. There are fewer Jews in the 114th Congress than in the 113th, but 5% of Congress members are Jewish compared to 2% of the American public, according to Pew.

Check out the religious breakdown of the 114th Congress below. 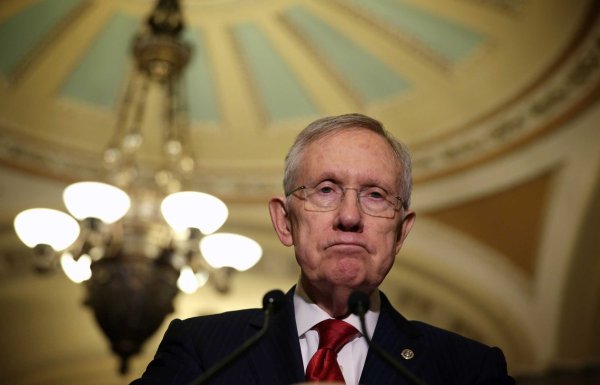 Harry Reid Badly Injured While Exercising at Home
Next Up: Editor's Pick