What You Need To Know About Same-Sex Marriage in Florida

When Florida’s ban on same-sex marriages lifts at midnight, the Sunshine State will become the second-largest state in the United States after California to permit gay marriage, and raise the tally of states where same-sex couples can marry in the U.S. to 36 states (it is also legal in Washington D.C.)

Before Monday’s Florida ruling, 64% of the U.S. population already lived in states that issue marriage licenses to same-sex couples. Adding Florida’s nearly 20 million denizens to the total will bring that number closer to 70% of U.S. residents.

Here are some key facts to know about the battle over same-sex marriage in Florida.

What does this mean for gay couples in Florida?

Beginning Tuesday, same-sex couples are free to marry all over Florida. Several court clerks are already planning to issue nuptial licenses to gay couples starting at 12:01 a.m. Tuesday, local news sources are reporting, and some couples have scheduled early-morning weddings.

But same-sex couples will be able to marry even sooner in Miami-Dade County, where a circuit judge lifted a stay at 11 a.m. on a decision that allows couples to receive marriage licenses. Many couples in the county were already planning to marry on Monday.

The legal wrangling over gay marriage in Florida goes back to 2008, when a voters in the state passed a constitutional amendment defining marriage in the state as “the legal union of only one man and one woman.” Since then, same-sex marriage has effectively been banned in Florida.

But in June 2013, a landmark Supreme Court decision, brought by New York widow Edith Windsor, established that the federal Defense of Marriage Act, which defines marriage as between a man and a woman, was unconstitutional. Since then, five cases were brought in Florida challenging the state’s 2008 gay marriage ban, and judges in all the cases unequivocally the ban unconstitutional.

The most important ruling so far, by Federal judge Robert L. Hinkle in Tallahassee, was stayed through the end of Monday to allow time for legal appeals. Florida Attorney General Pam Bondi, a Republican, sought extensions on the stay, but was turned down.

What does Jeb Bush think?

Former Florida governor Jeb Bush, who has announced he is exploring a presidential run in 2016, opposed gay marriage during his governorship, and didn’t endorse this week’s lifting of the stay. “It ought be a local decision. I mean, a state decision,” the former Republican governor said Sunday in a brief interview with the Miami Herald. “The state decided. The people of the state decided. But it’s been overturned by the courts, I guess.”

But the former governor wasn’t publicly enthusiastic in 2008 about the successful campaign to ban gay marriage. He has also cautioned his party against being perceived as too “anti-gay.” He said in 2012 that ““if people love their children with all their heart and soul and that’s what they do and that’s how they organize their life, that should be held up as an example to others, because we need it.”

Later on Monday in a note to the New York Times, Bush avoided taking a firm stand on the end of the gay marriage ban. “We live in a democracy, and regardless of our disagreements, we have to respect the rule of law,” Bush said. “I hope that we can show respect for the good people on all sides of the gay and lesbian marriage issue—including couples making lifetime commitments to each other who are seeking greater legal protections and those of us who believe marriage is a sacrament to safeguard religious liberty.”

Will the recent ruling get overturned?

It could, but it’s unlikely. Bondi, the state attorney general, is appealing Hinkle’s ruling to the 11th U.S. Court of Appeals, and that panel or the U.S. Supreme Court could still overturn the decision. But the Supreme Court’s rulings have tended to favor rights for same-sex couples, and appeals on behalf of these bans haven’t had much luck in the courts since the 2013 Windsor decision. 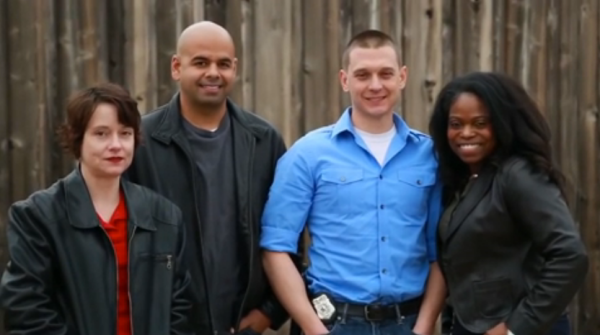 Watch Texas Police Argue in Favor of Same-Sex Marriage
Next Up: Editor's Pick