Pakistani authorities reportedly seized two Indian fishing boats on Saturday — a not uncommon occurrence, but one that has prompted greater controversy following a tense week in the waters between the two countries.

The Indian authorities claim that intercepted wireless communications show the Pakistani boat, which sank about 365 km away from India’s west coast on Jan. 1, to be working with an unidentified vessel nearby and coordinating with a contact in Pakistan as well as the MSA.

A statement from India’s Defense Ministry then stated that the four people on board the boat attempted to outrun the coast guard for over an hour, following which they hid under the deck and set fire to the boat, resulting in an explosion.

However, naval officers told the Indian Express that it was not possible for a typical Pakistani fishing vessel to outrun the powerful coast guard boats, and local fishermen said they did not see a fire. Moreover, photographs released to the media of the burning boat do not show damage consistent with the detonation of explosives.

Pakistan has rubbished claims that the Jan. 1 incident could be linked to terrorism, and there are reportedly no boats unaccounted for in Keti Bandar, the Karachi port where India claims the “suspicious” boat originated from.

“No fishing crews or boats are missing from Keti Bandar,” the head of the Pakistan Fisherfolk Forum, Saeed Baloch, told the Express.

India’s Defense Minister Manohar Parrikar stuck to his guns Monday morning, telling reporters that people smuggling drugs or other contraband would have surrendered rather than martyr themselves.

“Why would smugglers keep in touch with Pakistani maritime authorities?” he asked, adding that he would categorize them as “suspected terrorists.”

But that was not enough to placate opposition parties like the Indian National Congress, who urged the government on Monday to make the evidence public.

No material evidence from the Pakistani boat or bodies of its crew has been recovered so far because of reported bad weather, but a leading coast-guard official said he was hopeful that more clues would be forthcoming. The Defense Ministry, meanwhile, has ordered a full internal review of the intercepted communications and other evidence. 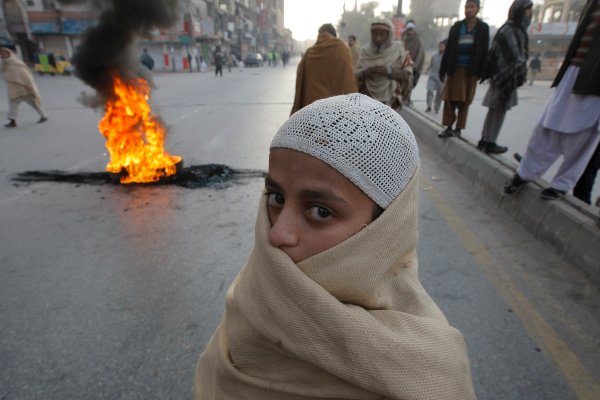 The Fear That Haunts Peshawar
Next Up: Editor's Pick