The body of an AirAsia QZ 8501 passenger is carried to an ambulance after being transported from a ship by a U.S. Navy helicopter from the U.S.S. Sampson at the air base in Pangkalan Bun, in Indonesia's Central Kalimantan, on Jan. 4, 2015
Darren Whiteside—Reuters
By Charlie Campbell

Only 37 bodies have so far been recovered from the 155 passengers and seven crew aboard Flight QZ 8501, which vanished from radar 42 minutes after departing Indonesia’s second city of Surabaya bound for Singapore early Dec. 28.

According to Suryadi B. Supriyadi, director of operations at Indonesia’s National Search and Rescue Agency (known by its Bahasa Indonesia acronym Basarnas), at least five ships with black-box pinger locators have been dispatched to where four large objects, believed to be wreckage from the plane, were spotted by sonar.

Once triangulation of black-box signals has been achieved, and conditions sufficiently improve, a team of more than 80 deep-sea divers will be deployed to get visual confirmation. On Sunday, divers had to abandon their forays after being confronted with near-zero visibility in the murky depths.

“If it cannot be done by divers, we will use sophisticated equipment with capabilities of tracking underwater objects and then will lift them up,” Supriyadi told reporters, according to the Associated Press.

Locating the black boxes is crucial to determining what made the twin-engine Airbus A320-200 crash, though severe weather is still presumed to be key factor.

“The most probable weather phenomenon was icing, which can cause engine damage due to a cooling process,” said a preliminary report on the website of Indonesia’s meteorological agency.

However, Mike Daniel, a Singapore-based aviation expert with more than three decades experience with the U.S. Federation Aviation Administration, thinks this is only one of “two different and distinct scenarios.”

“If they find the flight data recorders, it would show if icing is a factor,” he tells TIME. “But my sense is that with the strong storm cell updrafts reported by the meteorological folks that there may be more focus on high-altitude flight upset, as opposed to unreliable airspeed indications due to icing.”

The last cockpit contact between Captain Iriyanto and Indonesian Air Traffic Control occurred when the highly experienced former Indonesian air-force pilot requested permission to change direction and climb from a cruising altitude of 32,000 ft. to 38,000 ft. in order to avoid severe weather. The first request was granted, but the aircraft was only permitted to ascend to 34,000 ft. as there was traffic above.

On Sunday, Basarnas recovered four more bodies as well as more debris believed to be from the aircraft, including the emergency-exit window, some luggage, passenger seats and survival kits, AirAsia said in a statement.

AirAsia has still not responded to claims by Indonesian officials that Flight QZ 8501 did not have permission to fly on the Surabaya to Singapore route on the Sunday it crashed.

“The regulator requires further evaluation on the route, and AirAsia will be fully cooperative throughout the process,” AirAsia spokeswoman Malinda Yasmin said via email.

Indonesian aviation authorities have postponed all Surabaya-to-Singapore AirAsia flights in the meantime, although their Singaporean peers told Agence France-Presse on Sunday that the route was approved at the Singapore end.

Thirteen of the 37 bodies recovered to date have been identified. The remains of flight attendant Wismoyo Ari Prambudi, 24; passengers Jie Stevie Gunawan, 10; and Juanita Limantara, 30, were returned to their families Sunday.

Read next: For the AirAsia Bereaved, the New Year Brings Nothing but Grief 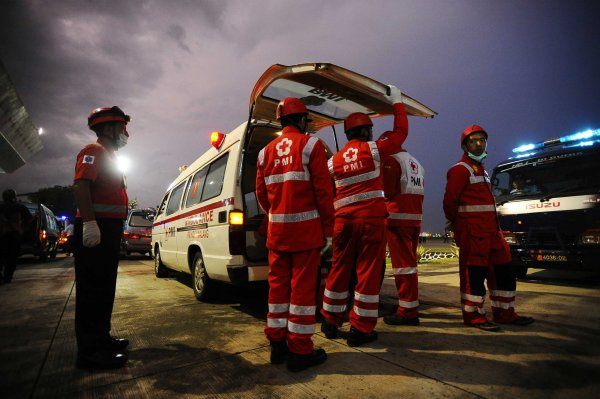 30 Bodies Found So Far in AirAsia Crash
Next Up: Editor's Pick