Human-rights lawyer Amal Alamuddin Clooney looks on during a news conference at the Acropolis museum in Athens on Oct. 15, 2014
Alkis Konstantinidis—Reuters
By Rishi Iyengar

Amal Clooney, the international human-rights lawyer currently representing jailed al-Jazeera journalist Mohamed Famy, called for his release in an op-ed on Sunday, while also clearing up a recent report that she was threatened with arrest by authorities in Egypt, where Famy is currently detained.

The op-ed, published by the WorldPost and co-authored by Famy’s other counsel Mark Wassouf, expresses reservations against the proposed retrial of Famy following the cancellation of his and two colleagues’ jail sentences. “A re-trial process is lengthy and its outcome is uncertain,” the op-ed reads. “It is also not clear how a new process would fix any of the deficiencies in the original trial.”

Clooney and Wassouf further state a hope and expectation that Famy will be pardoned by Egyptian President Abdul Fattah al-Sisi or extradited to his home country of Canada. They also call for the immediate temporary release of the journalist on health grounds.

Addressing a report in the Guardian last week that she was nearly arrested for her representation of Famy, Clooney said the incident took place in early 2014 before she got involved in his case and before al-Sisi came to power. She was reportedly warned that publishing of a report she co-authored by the International Bar Association could lead to her arrest, following which the launch was moved from Cairo to London.

“The [Guardian] journalist has since apologized for the misleading presentation of this matter in the article and corrections were made to the text to attempt to address this,” the op-ed says.

Correction: The original version of this article misstated the source of the op-ed written by Amal Clooney and Mark Wassouf. It was published by the WorldPost. 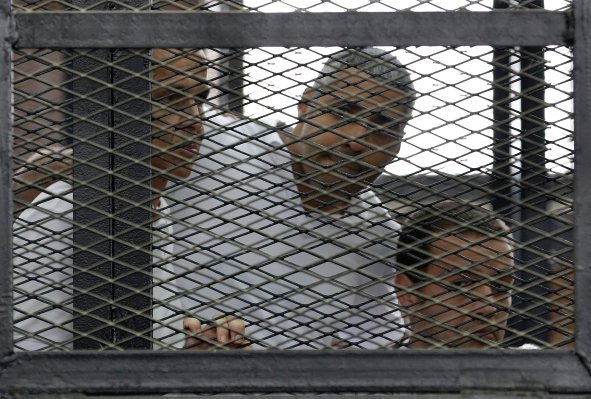 Retrial For Jailed Al Jazeera Journalists
Next Up: Editor's Pick