A Facebook photograph of Sarah Palin’s son standing on a dog to reach the kitchen sink has led to a heated online exchange between animal rights activists and the politician-turned-reality-TV-star.

Just a day after Palin posted a series of photos of her six-year-old son Trig standing on a dog, People for the Ethical Treatment of Animals released a statement calling Palin a “bizarrely callous woman.”

“PETA simply believes that people shouldn’t step on dogs, and judging by the reaction that we’ve seen to Sarah Palin’s Instagram photo, we’re far from alone in that belief,” said Ingrid Newkirk, president of PETA, according to the Associated Press.

“Chill. At least Trig didn’t eat the dog,” Palin fired back in a lengthy Facebook post in reference to President Barack Obama’s admission that he ate dog as a child in Indonesia.

Palin also pointed out that Ellen DeGeneres shared a photo of a young girl using a dog to reach a bathroom sink last year without any reaction from PETA. DeGeneres was the advocacy organization’s 2009 woman of the year. 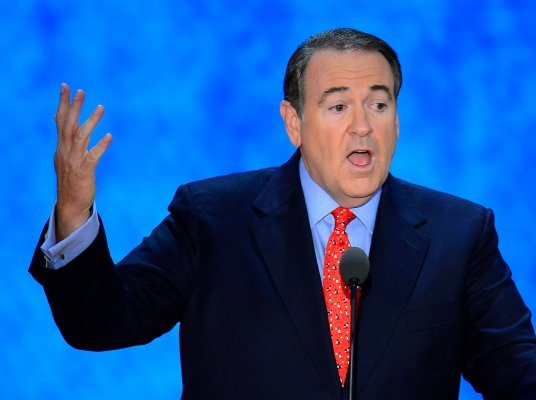 Huckabee to Explore 2016 Run
Next Up: Editor's Pick