Human-rights lawyer Amal Alamuddin Clooney looks on during a press conference at the Acropolis museum in Athens on Oct. 15, 2014.
Louisa Gouliamaki—AFP/Getty Images
By Michael Miller / People

Usually it’s her husband facing off against foreign governments in one of his thrillers – but after criticizing the Egyptian legal system, Amal Clooney says she was threatened with a real-life prison cell.

The judiciary criticisms came in a report written for theInternational Bar Association in February, in which Clooney, 36, called into question numerous perceived flaws in the Egyptian court system – flaws that she believes directly led to the conviction of one of her clients.

“When I went to launch the report, first of all they stopped us from doing it in Cairo,” Clooney, a human rights lawyer in the U.K., said in an interview with the Guardian. “They said: ‘Does the report criticize the army, the judiciary, or the government?’ We said: ‘Well, yes.’ They said: ‘Well then, you’re risking arrest.'”

Clooney’s report suggested that certain government officials hold too much power over judges and state prosecutors. She recommended that officers of the court act more independently, especially in politicized cases.

Unfortunately, Clooney told the Guardian “that recommendation wasn’t followed” in the recent trial of one of her clients, in which she claims “a handpicked panel led by a judge who is known for dispensing brutal verdicts” led to an unfair conviction.

Clooney is currently defending Mohamed Fahmyone, one of three Al Jezeera journalists accused of aiding the outlawed Muslim Brotherhood in Egypt. Fahmy, Peter Greste and Baher Mohamed were initially found guilty of the crime and sentenced to 7 to 10 years in prison last June. However, all three were recently granted a retrial after a new judge was appointed to the case.

The original judge, Mohamed Nagy Shehata, gained widespread notoriety during the initial trial for his bizarre behavior, including “rarely taking off his aviator sunglasses, mocking Fahmy’s fiancée, and for cracking a joke about World Press Freedom day,” according to the Guardian. “A few months later, he also sentenced to death 188 people, Clooney said, ‘in one mass trial which didn’t distinguish between each defendant’s criminal responsibility.'”

Although the new judge refused to throw out the case entirely, he did agree to a retrial and acknowledged some problems in the original case during an appeal on New Year’s Day, according to Al Jezeera. But Clooney fears the mistakes of the first trial will follow into the second: “If the idea is: well, there were errors and now there’s going to be a retrial, but then the retrial operates on the same basis as the original one, that doesn’t really mean much,” she told the Guardian.

Clooney fears her only option for the defense is “to continue and double our efforts to achieve his release in other ways. Unfortunately we have to conclude that we can’t rely on these Egyptian court processes to achieve a fair or swift result.”

As for Fahmy, who was born in Canada, Clooney believes his best bet is deportation: “There are many different ways in which the transfer from Egypt to Canada can occur, and as long as there is a genuine commitment on both sides, I see no reason why a transfer can’t happen in fairly quick terms.”

After her stylish Venetian wedding to George Clooney in September, Amal has continued her legal work. In October, she visited Greece to discuss the country’s bid for the return of the Parthenon Marbles from Britain. 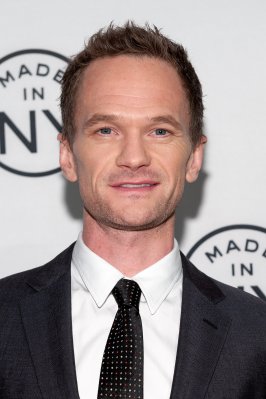 Neil Patrick Harris Has New Year's Resolutions for You in His Latest Oscars Promo
Next Up: Editor's Pick