NYC Isn't Very Nice to What It Doesn't Understand

I moved to New York City a little over a year ago with my boyfriend Patrick and our best friend from college, Josh. We’ve been fortunate; we find success about as often as we get our butts kicked by this city, and that can’t be said for everyone. Being from a small city in West Virginia, the transition wasn’t easy. But as we became more comfortable with the city, the city became more comfortable with us.

Except when it isn’t.

Patrick, a brilliant actor and wonderful person, has Tourette Syndrome. What has surprised (and disappointed) us most about this move is that he cannot comfortably ride the subway due to harassment, which is astonishing in what is supposed to be one of the most vibrant and progressive cities in the world. For Patrick, a pleasant commute involves constant aggressive glances from strangers. A bad commute — which is much more common — involves those same strangers asking, “Are you going to vomit?”, calling him “retarded,” mimicking his sounds and movements, outwardly laughing and sometimes actually hitting him. Once, he and I were together on the A train having a perfectly pleasant conversation when a woman approached us out of the crowd, slapped him hard on the back and screamed, “STOP DOING THAT!”

The first thing I realized when we started dating is that people in general, no matter where they are from, have no idea what Tourette Syndrome is — even medical professionals. Last December Patrick had to have surgery, and during his preliminary visit to the doctor a nurse asked, “Are those movements a symptom you’re experiencing?” His chart was on her lap.

Maybe it’s a neurological condition that somehow gets overlooked in life, but these things happen whether he’s alone or in a group of friends. It doesn’t matter how many people he’s with at the time — talking to him, laughing with him, totally comfortable with the situation — for some reason, strangers always feel entitled to butt in and ask, “What is going on with you?”

TS is defined by the Tourette Syndrome Association as “involuntary movements (tics) of the face, arms, limbs or trunk. These tics are frequent, repetitive and rapid…” Other symptoms that suggest TS:

Patrick describes it as “a misfiring of signals in the brain” and “being struck with an immediate need to tic.” When asked if he can suppress the tics, he compares holding them in to “not going to the bathroom when you really have to pee — you can only do it for so long.” Except in rare cases, TS does not affect one’s ability to communicate, have a job, have relationships or function in society. It is not indicative of one’s intelligence and is not equivalent with autism. Patrick can perform on stage movement-free because, with focus, his symptoms disappear.

So why doesn’t he focus harder all the time? It’s not the same. He has to forget that he’s focusing and be totally absorbed in what’s happening around him. The same thing happens when he’s watching a really interesting movie or having an intense conversation. He is able to live his life and do the work he wants to do happily — or, he would be, if New York would stop giving him such a hard time.

As I’m writing this, Patrick is on his way home from work, only a few minutes into his commute and I’ve already received several texts about people moving away from him on the train. I’m preparing for him to be pretty upset when he comes home, and my heart is breaking. Have you ever considered how isolating and humiliating it is to be treated like that?

Say what you want about the South, but this wasn’t an issue at home. Actually, the smaller (and often more conservative) the community, the less inclined people are to make comments about Patrick. There have always been questions and curious looks, which are understandable, but there’s a different level of aggression here that is alarming.

Considering how amazingly diverse NYC is, I thought it was safe to assume that no one would notice the one guy who’s moving a little more than everyone else. There are subway performers who do crazier things in the course of four stops on the A train than Patrick does in his entire day. I once saw a man pee on a subway car and no one batted an eyelash. It’s all very confusing.

I am a different person since I met Patrick. Just by knowing him I’ve learned to fight the side of myself that jumps to judgment and prejudice. We all have at least one thing, visible or not, for which the world judges us. Are you a former alcoholic? Aren’t you tired of people calling you lame for passing up drinks? Are you a woman? Isn’t it terrible, being scared to walk home alone after dark? Do you have a stutter? Do you have acne? It isn’t okay, but we are scrutinized by strangers for something every day. Don’t you want to be the person that doesn’t?

We are all carrying with us some burden we didn’t ask for. The next time you’re on your morning commute and the stranger beside you does something you don’t understand, I hope you’ll choose one of two paths:

1) Ask them about it — kindly. If they need help, help them. If they want to explain it, listen. If they don’t, let them be.

2) Don’t say anything, and don’t stare. Live your life and let them live theirs.

Not long ago Patrick and I were on our way out to dinner when a woman sitting next to us on the train very politely said, “Excuse me, can I ask why you’re moving so much?” He said “Of course you can,” and proceeded to explain it to her. We had a lovely conversation.

And for the rest of the night, he smiled. 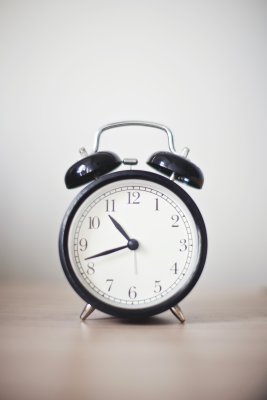 Improve Your Patience By Making This One Change
Next Up: Editor's Pick